Things are looking up!

So far, so good today! They took her off CPAP and put her back on trach collar early this morning, and she's doing well so far! Hopefully this will last. She's still on over 60% oxygen (need to be under 50% to go to the floor).

Last night when I left I told her nurse what I wanted to accomplish today (as far as getting the lines removed and getting her moving around). She told them during the night and they agreed. They rounded late today, so the orders to remove the lines didn't go in until after noon. During rounds they said her platelets were low, so they wanted to give her some blood. But then I heard that was overruled by someone. So, she didn't have to get any.

The IV in her left hand stopped working. So they wanted her to get a new one before they pulled the other lines so they would always have access. Luckily the nurses told me to go sit down during the whole IV thing so I didn't have to be one of the ones torturing her. I've been doing that all the time it seems. The nurse got in on the first try, which is totally awesome! So her arterial line (in her right wrist) was pulled. Now we are just waiting on them to pull the one from her chest (it goes into her right atrium). Once she pulls that I can hold her and let her sit on my lap and walk around if she wants. Although the nurse said that it might be difficult for her to walk around on 60% oxygen. I'm thinking she would drain a portable tank pretty fast. But, she probably won't want to be up for long.

We had another visitor today. My friend Donna came up on the train. She got Harlie to smile for the first time in NINE days! 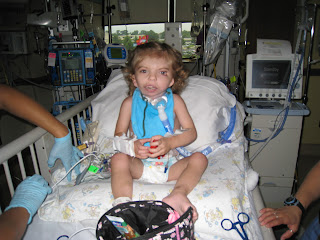 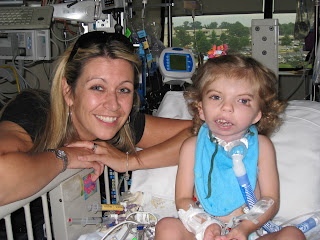 Doesn't she look so good??!! Oh man, do I miss that face!!! And I couldn't believe this, but as Donna was leaving she leaned down and told Harlie she had to go and to give her a kiss - and she DID! Really, now. And she can't give her mama a kiss?!?!? Ugh.

Well, I guess beggars can't be choosers. At least she was interactive and more herself again. And I got to see her smile, which totally made my day (and Donna's I'm thinking).

Anyway, she'll stay in the CICU again tonight. But, with any luck she'll be moved to the floor tomorrow!

Email ThisBlogThis!Share to TwitterShare to FacebookShare to Pinterest
Labels: cpap

Hi Christy,
Glad to hear that today is better for both you and Harlie! That was great of Donna to come and visit and it sounds like the visit lifted spirits!
Thank you for all of the updates. Hope to talk to you soon.

OH TO SEE THAT SMILE MEANS THE WORLD TO ME...KEEP SMILING HARLIE AND GET HOME. WE ALL MISS YOU.

I guess that is how it is. Two steps forward and one step back. As long as she keeps moving forward. So happy she is at least improving.

What a cute picture! I'm glad to hear see she's doing so much better. I can tell you, if you use a Venturi on the trach collar, you can probably get the portable to last about 45 minutes. (stinks I would know that, doesn't it.)

So glad to hear Harlie is moving in the right direction. She looks so sweet in her picture...that sparkle is coming back. Sending good thoughts and lots of prayers your way.

Just checking in to see how things are going. I am glad today is better than yesterday and I hope tomorrow is even better. Marcy.

Yay!! So glad that things are looking up and that Harlie found her smile. I know how much the simple things really mean to worn Mamas!

She really looks great! I'm so glad things are going better. I think she's going to improve a lot with the lines out and being able to move more and get some cuddles.

I remember so well the roller coaster of recovery...but she does look particularly good in these photos!

So nice to see that smile!! Keep your spirits high. Love to you and Harlie. We hope to see her home real soon! Take Care, love you lots!