Today we had Harlie's post-op appointment in DC. It went pretty well. Her sats were 77 while were there (on room air).

Side note: On Friday, I decided to take her off oxygen during the day (she still gets it when sleeping). When she's hooked up she just seems to not want to move around much. And I really didn't think that the oxygen was making that much of a difference. I figured if she looked worn out, or had blue nail beds, I'd put her back on. So far, so good. Although I have to admit that under the fluorescent lights at the hospital, her fingers were looking a little blue to me. But I don't think giving her more oxygen will help.

She was fine until we went into the lab to get the blood drawn. She knew very well what was going down and she was NOT happy about it. But they rock there, and got what they needed with one stick (and they didn't need much) so it was very quick and she recovered well.

Then she went to get her x-rays. We got the same woman we had last time (for her pre-op appointment). She is awesome. So quick - and nice - which is wonderful. She put Harlie in a chair and strapped her hands in a velcro holder to keep her arms up. I thought for sure Harlie would hate that. But she willingly put her other arm up so she could strap that one next before she even asked her to.

She looks absolutely miserable in this photo - but she really wasn't. I think she is just so NOT photogenic! 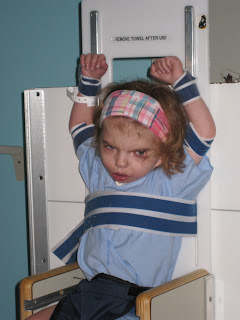 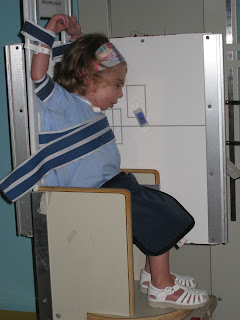 Anyway, they were happy with how things look so far. Her blood work was all good - everything came back to normal since the surgery. Her x-rays looked great. Her incision looks good (although her skin had a little reaction to the steri strips - but that will go away in time). We can't pick her up from under her arms for another 3 weeks or so. I will be very glad when we can do that again.

She was so happy we were leaving. When she had to put a gown on in the examination room, I think she was afraid that we were there to stay. So, when I told her we could get her dressed, she was very happy. She even blew Katie a kiss! Here is her signing that she wanted to get down... 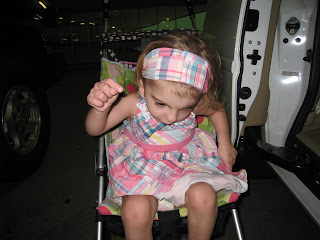 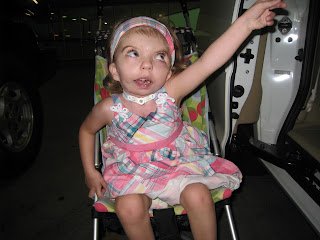 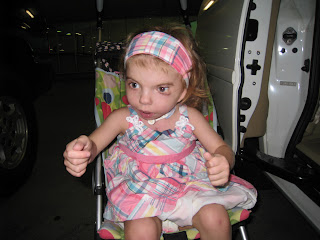 Oh! I have a story to tell you about that happened today, but today was a long day and it is late, so I'll have to write about it tomorrow.
at June 29, 2009

Email ThisBlogThis!Share to TwitterShare to FacebookShare to Pinterest
Labels: post-op

wow...she looks so darn cute in her outfit and signing! It makes me so happy to see her getting back to her oldself! Glad to hear the post op appt went good and Harlie is recovering the way we all wanted. Way to go Harlie!

HAAAA! Matt asked if that was also the sign for "let's get the heck out of here!!" She is so cute in her little dress and headband :-)

LOVE her outfit!!! :) I'm so glad the post-op appointment went well! I'm really hoping we're all well by the weekend so we can catch up!

matching dress plus headband!? Too cute - she really does love the accessories. Glad thea appt. went well. Thinking of you!

Looking good!!! So cute to see her signing.

Btw: How do you get away with an umbrella stroller. We lug so much equipment it would be insane to "carry" it all. Do you carry it all yourself?

Janis - I carry a very large diaper bag and I have the new Devilbiss suction machine that weighs only 4 pounds. I meant to post a pic of it. I'll try to remember to do that tomorrow. Anyway, that umbrella stroller is really good in that I can have the suction machine hanging on the back and even if Harlie isn't sitting in it, it still stays upright. I was thinking I need to get a backpack diaper bag - I think that would help a lot. But it just hasn't made it to the top of my priority list yet. What do you use?

Janis - I carry a very large diaper bag and I have the new Devilbiss suction machine that weighs only 4 pounds. I meant to post a pic of it. I'll try to remember to do that tomorrow. Anyway, that umbrella stroller is really good in that I can have the suction machine hanging on the back and even if Harlie isn't sitting in it, it still stays upright. I was thinking I need to get a backpack diaper bag - I think that would help a lot. But it just hasn't made it to the top of my priority list yet. What do you use?

She is such a cutie! I especially love the outfit. She's so good to be so cooperative.