Just a quick one to let you know that Harlie is doing well.  She's very happy and playful and rarely complains of pain.  I've decided to keep her home from school this week.  The bruises are fading more and more each day.  So, I think it's best not to rush back to school and either upset other students, or have them upset her by staring at her.  I know they wouldn't mean to upset her, heck, I stare at her a lot throughout the day!  But, I'd rather not risk it at this point.

I have been neglectful in taking daily photos of her to show how she's looking.  But, I did manage to get some video last night.  Kim came over yesterday to cut the kids' hair.  Later that night, I gave Harlie a bath.  I take her off the oxygen for her bath and while getting ready for bed.  Then all of a sudden, out of the blue, she put her finger over her trach and said, "I love you."  I couldn't believe it.  It was so cute I could have died!  I ran downstairs and grabbed my phone and took some video.  You can tell that she gets so excited to hear herself.  She hasn't been able to wear her cap in almost a year.  So, we've heard so little of her voice.  This was so wonderful...


I've watched these videos like a million times.  She is such a sweet goofball!  I just can't get enough of her!

Email ThisBlogThis!Share to TwitterShare to FacebookShare to Pinterest
Labels: I love you, video

We flew home Friday afternoon.  I was thinking that would be the worst day as far as swelling goes.  But, I was wrong.  It was Post-Op Day 3.  Anyway, this is how she looked right before we woke her up on Friday morning.

This is her at the airport.
She was in a great mood.  Very playful and cooperative.  I guess she was excited to be going home.  We definitely got some stares at the airport, but it wasn't as bad as I was expecting.  After I took the picture of her above, she wanted to take a picture of us...

We couldn't fly Jet Blue like we normally do because their ticket prices were crazy expensive.  Over $250 MORE per ticket than US Air!  So, we flew a tiny plane home.  It was the kind where you had to walk on the tarmac then go up the stairs to get in the plane.  Harlie thought it was great.  They let us board first and gave us the first row.  At first, we had three separate seats on the plane, which clearly wasn't going to work.  So, they put me and Harlie together and Tom was just a few rows back.

The good thing about the smaller plane was that Harlie could stay in her seat AND look out the window at the same time.  She can't do that on the bigger planes.  So, that worked well.  She spent a lot of the time looking out the window... 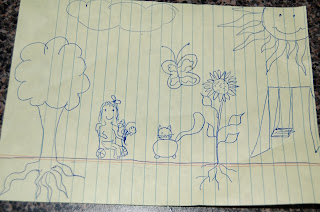 She said she drew it for my daughter.  She said her daughter is five.  So, I told her why Harlie looked like that and she was very nice, too.  Obviously she was wondering.  Which, I totally understand.  I would wonder, too!  Then she said that she could tell we take very good care of her.  I love nice people.  They make the world a better place.

My Mom and Dad picked us up from the airport.  When we got home the table was already set and the food was in the oven.  Grandma and Pap Pap had dinner all ready for us.  It was such a nice way to come home!  I had at least three helpings of everything.  I don't know why I was so hungry!  Then I fell asleep on the couch while the boys were going crazy.  That is so NOT me!  I was so tired!

I had to force myself out of bed.  Cooper had a soccer game at 9:30.  I got out of bed at 9:10, brushed my hair and teeth and then took him to his game.  Inside, I was still asleep.  I am a terrible soccer mom.  But, I am cutting myself some slack.  Everything about me was exhausted.  Inside and out.  Brandy was working that morning and as soon as we got home, I went up and took a nap until she left.

After that I was still feeling very run down.  But, I got through the day.  Harlie was fine.  Really, she was.  Here she is playing outside for a few minutes...

In this pic, you can see how far her bruising goes down her chest.  Isn't that crazy?

I took some pictures of the incisions (under her jaw) but they are pretty gross.  So, I will spare you.  She's still bleeding a little.

I took Harlie and Rooney for a walk that afternoon and came across a guy walking his dog.  Of course we had to stop and let the dogs say hi.  He saw Harlie and said hi to her and he did such a good job of not freaking out.  But, I couldn't stand the thought of him not understanding, so I told him that she just had surgery and that's why she looks like that.  He was very kind to her, and to me.

We had some friends over for dinner that night.  And when Marcy saw Harlie, she gave me a big hug.  Which was really nice because it is hard to see her look like this.  And I really appreciated her honesty.  I know people want to make me feel better by telling me she looks good.  But, I think she looks horrible.  And my stomach hurts when I look at her.  Even when she's smiling.  In fact, I think it hurts more because she is smiling.  What a brave, resilient girl she is!  I am the one who is weak now.  I think I need pain meds more than she does!  She can look at her picture and her reflection in the mirror and it doesn't bother her at all.  I'd give anything for her to talk to me and tell me what she's thinking.

Anyway, Marcy said at the end of the night that they had to go because I looked so tired.  I was exhausted.   Like not myself exhausted.  Yet, Harlie was up and running around, playing and smiling, and not complaining at all.

I got a good night's sleep and woke up feeling MUCH better, and much more like myself.

Harlie is still happy and not complaining.  I put her hair up in two bows because her hair keeps sticking to her incisions (they are still bleeding a little).

As long as her incisions are bleeding, I am not sending her to school.  And even with the bruising, I don't want to send her.  They are out on Tuesday for election day, so I guess I'll see how she looks then.  I think that bruising is going to be there, changing colors for a while.  So, I don't think I can keep her home the whole time.  I'll just have to think it over.

Anyway, Tom took the boys for a bike ride this morning and I took Rooney for a long walk, while Brandy came over to stay with Harlie.  Tom and the boys and me and Rooney met up at our local Starbucks to see a bunch of our running friends. 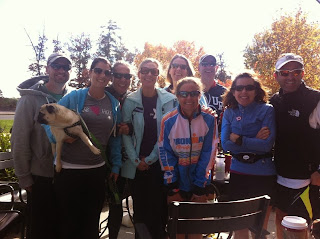 I am still nursing my piriformis injury, so no running for me yet.  I was making good headway on it until we went to Boston.  But, at least I can see the light now.   I have been seeing Rob Green at Active Chiropractic for a few weeks now.  He gave me some exercises to do and I get e-stim when I'm there.  I've gone several days with zero pain, and that's a first since July!  So, I'm very happy about my progress. I am going to be smart about this and not jump back into running too soon.

Well, that's about it for now.  As always, thank you so much for all your love and support.  Without it, we'd be mush for sure.