At 7pm tonight I went to go get some dinner downstairs and when I got back to her room, this is what I saw... 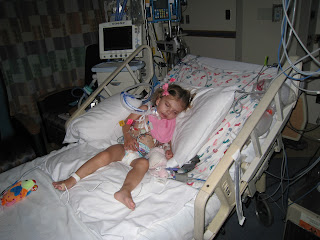 Now how darn sweet is she? And while I think she looks quite comfy and cozy, it makes me oh so sad!!! I try so hard not to be sad, and for the most part, she really helps. It is almost impossible to be sad when she's so happy and playful and funny. But, she's not any of those things right now. And I miss her!

As far as how things went today...

They pulled her chest tubes out, which is great. While they tell me that is pretty painful, she should be much more comfortable later. And I really like not hearing the bubbling of the suction. Plus, it's just one less thing to have to worry about.

She had a fever today. They took cultures, just be on the safe side.

They took her off CPAP, but decided to put her immediately back on. Her heart rate was still pretty high (around the 160s, which is very high for her) and with the fever, they just didn't want to tire her out too much. After a few hours, they took her back off CPAP to see what she could do. And then a few hours later, they put her back on CPAP again. They said she will stay on it for the rest of the night.

I forgot to mention that they were thinking that she had a collapsed lung on Thursday. When they took another x-ray on Friday morning (after she'd been on CPAP all night) the x-ray looked "significantly better." So, hopefully another night on it will do the trick so she can come off of it for good tomorrow.

They have been watching her heart rate closely today. They took her off the pacemaker to see what she would do. And then they put a holter monitor on her to get a more detailed look at what's going on. She will wear it until Saturday night and then the doctor will read it on Sunday. The reason why this is an issue is because she already had 2nd degree heart block (her heart beats have long pauses and short pauses, with no rhyme or reason) and with her main heart defect (congenitally corrected transposition) she is at a higher risk for complete heart block. Which would NOT be good, and would make her pacemaker dependent.

Tom left last night. He took his mom and Murphy home after our fun day yesterday. It is always so much harder when he's not here. He always makes sure we eat right and it's just plain better when he's here with me. Since he drove them home last night, he took the car. Which is not that big a deal. The RMH has a shuttle to the hospital during the day. But today was so pretty, that I decided to walk there (it is about two miles, one way). Plus, I knew I was going to have to walk home anyway because they don't have any shuttles back to the RMH after 5:30pm. And I like to hang out with Harlie until she goes to sleep for the night. Luckily, it's staying lighter longer. I just don't want to walk home in the dark.

My mom came up on the train today to spend the day with us. Again, I was hoping that Harlie would have some sort of reaction. Nope. She still just lays there like a wet noodle. No spunk. I am really hoping that she'll start to turn around tomorrow. If she doesn't, I will officially be worried.

As of right now, there are two theories as to why she's not more herself.

One is that all the sedative drugs she was given could have settled into her tissues and so her body could be still feeling some of the effects.

The second is that she is working so hard to breathe, that it's just too hard for her to focus on anything outside of breathing. Basically it's like she's running a marathon. I mean, how much talking, laughing, etc. do you think marathon runners do while running?

Either way, she should be getting better by now!

So, she will remain in the CICU again tonight.

Hopefully I will have a good update in the morning. Thanks for thinking of us!!
~Christy
at June 12, 2009

So glad they took the chest tubes out. I'm saying my prayers she's back to her funny little self soon.

Thank you so much for all of the updates - I absolutely love the picture of her tonight! :)

She is such a little sweetheart. Please give her lots of kisses from us. Praying tomorrow is a much better day. Take care of yourself.

I love that sweet photo of her sleeping. Still thinking of Harlie and hope all is well soon.