I know it has been a few days and no new post. Nothing to be alarmed about. Just busy days with not enough computer time. Harlie is happy and she has been loving the warmer, sunnier days we've had lately. Well, who isn't, right? I know that I am more ready for spring and summer than I have ever been!

Tomorrow morning we are headed back to Norfolk for our weekly appointment with the Infectious Disease docs. Hopefully this one will be a lot shorter with less drama and less elevators!

We are trying again to meet my friend Melissa and one of her daughters so the kids can play in the play area at the mall. I am bound and determined to give Harlie some sort of reward after these appointments!

Harlie has been doing really well with her communication device. The other night she coughed during dinner, put down the puzzle she was working on, grabbed her device, (at this point Tom looked at me and said, "this should be interesting" as we watched her do this) turned it on, navigated to the page she wanted like a pro, and pressed the "I need to be suctioned" button.

Tonight, after dinner, she used it to tell us she wanted to go outside. None of this is "new" communication for her, as she can communicate those things with signs, but the thing I find amazing is that she gets that she can use it to "talk". And it is going to be SO cool when she uses it with someone who doesn't know sign.

Anyway, it is late, but I just wanted to leave you with some pictures I took of Harlie outside on Sunday. These are the first pictures that show her missing tooth. 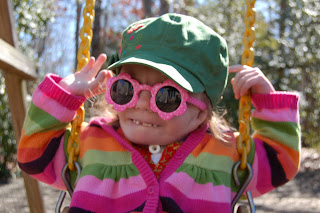 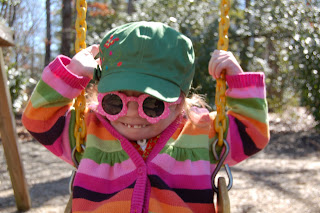 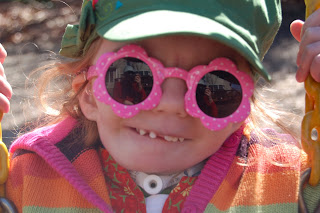 As you can see, she digs accessories. She loves hats and she won't even consider going outside without sunglasses. Period. So, needless to say we've built a small collection. This particular pair is from a group of girls I used to work with many years ago (back before Murphy was born!). A couple of them brought me lunch a week ago and a get well/recovery bag for Harlie stuffed with goodies. How cool are they?

To be honest, while I think she is adorable, I'm still having a hard time getting used to it. The wire on her right side went between her lateral incisor and her canine and pushed them apart. To me, this gives the appearance that she's missing two teeth. That's the part that bothers me most. And now that she doesn't have the front one, the lateral incisor has nothing to push it back over to where it was. So, I assume it will stay the same for the next few years. Guess we'll have to see what the dentist says - when we ever get that back in our schedule!

Well, that's it for now. I'm hoping that tomorrow will be a good day with some fun at the end. I'll let you know how it turns out...

I so envy her accessory collection, that's a kid after my own heart...

Alex broke her two front teeth when she was 2 and lost them when she was almost 4 so I know how you feel - like almost everything else with our girls it's just seems unfair and not natural (so you would think we would be used to that by now!)
She looks so adorable in all of her accessories!!