I just don't get it.

How in the world can a little girl with cardiac and pulmonary issues - including low oxygen saturations - go the entire day - with NO nap and STILL be awake - with energy, mind you - at 9:07PM??!?!?!?! Oh, and did I mention that she had physical therapy and an outing to the Children's Museum today????

She really makes no sense. Medically speaking, I mean. I'm betting that one of her doctors would tell me she's making up for lost time.

So, my friend Jennifer took her kids and Harlie to the Children's Museum today. She met some of her nurse friends and their kids, too. We joked that there would be enough PICU nurses around should anything go wrong! Anyway, Jennifer said they all had a great time. Here are some pics from the day... 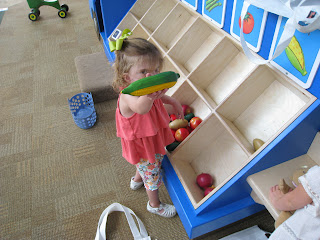 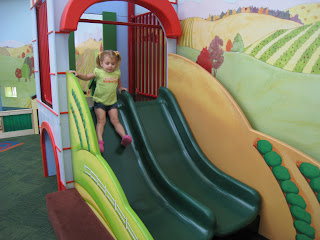 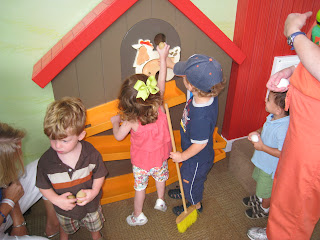 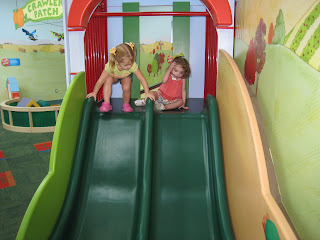 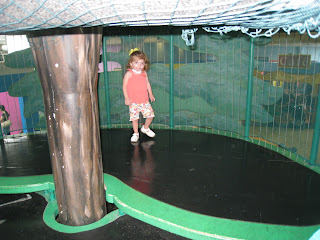 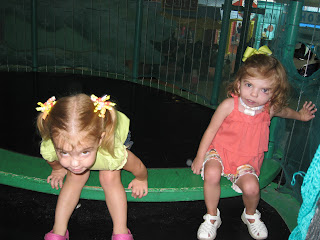 Kyleigh, her brother Austin, and Harlie. 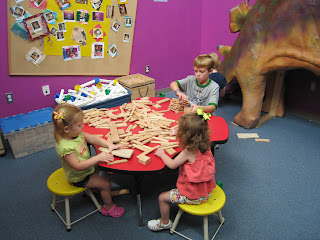 So, while Harlie was on her play date, I had my pureeing lesson with Harlie's feeding therapist, Allison. She basically showed me some tricks and tips. Like knowing when it's the right consistency, and what to add if it isn't, what kind of products to use, what food combinations work well, etc. And she showed me a chart they use there at the feeding clinic for the day patients (the patients that are there every day for several weeks). It was time well spent. I really think it was helpful and I'm really excited about what we'll now be able to introduce to her. I only wish we could have been where we are today six months ago! Then Cooper's baby food experience would have been a lot more enjoyable! But, he probably would have gotten a lot fatter. And based on yesterday's post, he doesn't need any extra fat. So, maybe the timing was good after all.

Today we made pancakes with bananas, syrup and butter (that will be her breakfast, of course), and apples (used a can of fried apples). I am so excited to be able to give her real food for the first time in her life!!! I don't think she shares my level of excitement, though. And the jury's out on whether she can even taste it (I've been told that taste is 80% smell, and we're thinking she's not smelling too much with the trach right now). But who cares? It's REAL food and it's going into her mouth and down her throat and into her belly - the way God intended!!! Can I get an Amen?!

So, I was thinking today about all that Harlie has accomplished in a very short time.

Do you know that it was just May 7th when she swallowed her first official purposeful whole bite? Not even three full months ago? And in that time, she had her third major heart surgery, spent almost two weeks in the cardiac intensive care unit, missed five weeks of feeding therapy, AND got potty trained! Yet she still managed to go from eating grams at a time, to ounces at a time! And I've been told that for each week a child spends in an ICU, it takes them one month to get back to themselves again. So, in her case, that would be two months. Which means she should be back to herself by mid-August. WOW! I just can't tell you how much she amazes me. What an incredibly strong little girl! And she doesn't even complain. Not even a little bit. I am so darn proud of her.

Oh! My Dad had his post-op appointment today and they said he does not need chemo! So, that's great! He just needs to work on gaining some weight back. I know, so many of you wish you had the same problem.

Amen and Amen! She is an amazing child and you, along with all of your family, are so very proud of her. But let me also say this...Harlie would never be where she is if it wasn't for the grace of God and the amazing parents that she has...you show love, patience, endurance, and strength to her everyday..no wonder she excels at everything she tries!!!

How did she do it? Austin would have melted down by then. I guess she is recovering nicely.

Kids are just amazing aren't they?LOL. Looks like Harlie had a great time at the Museum.