On Saturday we went to Zach's 5th birthday party at Pump it Up.

Donna and Aaron, and the birthday boy. 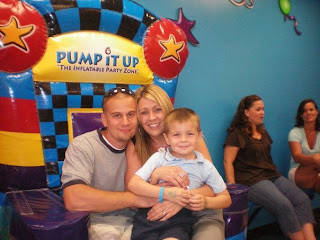 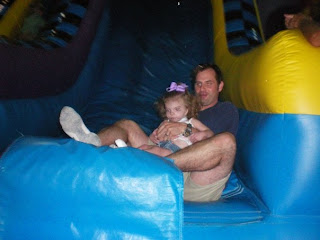 Donna took her once and said that when they got to the top, Harlie wouldn't wait for her and just slid down by herself! I was so shocked! She really did great and I think it was a great work out for her. I know that after going through the obstacle course with her, I was tired. It was hard work! Of course I barely saw Murphy. He was just a blur running around with all the other kids.

And Donna's nieces were so darn sweet! They realized that she signed and immediately tried to remember what they knew so they could sign to her. Then they kept asking me how you say things so they could sign with her. It was really very heartwarming.

Then after play time, they went into a party room for cake. Harlie just followed all the other kids in and sat right down like she's done it a thousand times. She didn't know anyone near her, but she didn't seem to care. She's on the left, third from the far end. I thought that she would look for Murphy, but didn't. In the group photo, she did look for him and sat down next to him. So cute! Anyway, Murphy is on the left, right in front, half way in the picture. 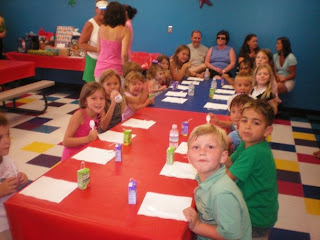 They passed out juice boxes and I was anxious to see if she would drink any since she could see everyone else doing it. She did try, but the straw was just too small for her lips to close around it. Oh well. In time, I'm sure. I tried to see if she would try the icing from the cake, but she clearly did not want any part of that.

Here are some other pictures that Donna got for me (my camera battery died!) 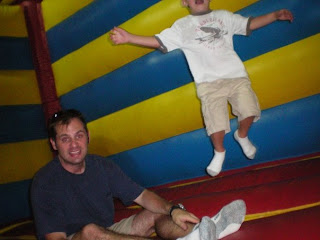 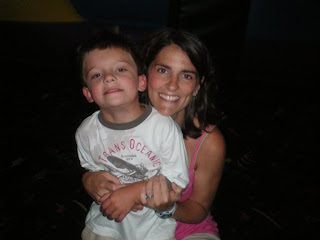 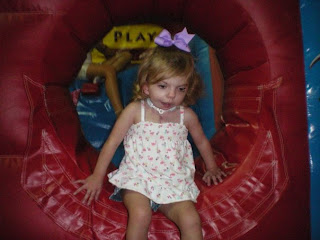 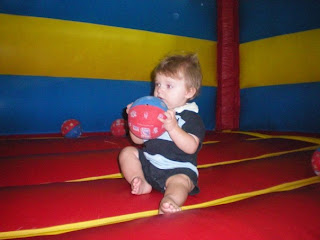 Our big news here is that I think I can say that Harlie is pretty much potty trained. I can't believe it. She went all weekend with only ONE accident! Even at the birthday party, she told me she needed to go and went (okay, like three times, which is a little ridiculous in my opinion, but beggars can't be choosers). I assume, like with all things Harlie that we will take one step forward and two steps back. Or the other way around. Either way, we'll just have to see how things go. I did make an appointment for her to see her general surgeon in DC. The one who did her bum surgery. He told me then that he didn't know if that one surgery would do the trick or not. So, maybe he can shed some light on what I can expect as far as her bowel movements go. I got lucky and we got an appointment for three weeks from now. Hopefully, that will go well with no news of more surgery (on that particular body part).

After the party we all came home for naps and then we went to the end of our street for a little block party. It was a lot of fun. Although quite challenging to sit and talk to other adults when you have to get up and chase the little ones around. Harlie went potty about SEVEN times during the couple of hours we were there. I think she likes the whole routine, the clapping, and washing her hands. Of course, she is still on a diuretic (which makes you pee a lot), so I'm sure that has something to do with that. I'm hoping that her cardiologist will take her off it completely when we see him again (in less than two weeks).

The kids had all their big wheels out (we were in a cul de sac) and were riding all over. At one point I turned around and saw Harlie chasing a kid on big wheel. It was definitely the closest she's ever come to running. It was so cute I almost cried right there! I am just so thankful for all that she can do! I'm betting that feeling will never go away.

Email ThisBlogThis!Share to TwitterShare to FacebookShare to Pinterest
Labels: party

We so enjoyed seeing you all Saturday evening! Let's get together soon on all fronts--blogging, running, etc. Tell Harlie we want to have her over again so she can use our potty. :) What an awesome job she's doing. Way to go Harlie!

Loving reading all these fun reports on Harlie! Playing, eating, pottying! So proud. Now, if only Parker wasn't adament that it is fun to pee pee in his diaper!

I'm so glad Harlie enjoyed herself at Zach's party - she really was all over the place!! I can't tell you how many people commented on her and what a fighter and inspiration she is! So proud to be "ya'll's" friends! :)