Snow. Snow. And evidently, more snow. Talk about unusual weather for Richmond! And I'm over it. Schools were closed today and are closed again tomorrow. Which means no school for Harlie, as well. Bummer. And we're supposed to get even more snow at the end of the week. Ugh.

Well, I guess this just gives her more time to get used to the increased volume in her hearing aid.

Yesterday (Monday) we went to see Ann about Harlie's hearing aid. It was her first appointment since getting her aid on January 4th. I was so proud to tell her that Harlie is now wearing her hearing aid - with no struggle - all her waking hours! WooHoo! She said she was very surprised. She was hoping for an hour or so at a time. I told her that we gave her a week or so of letting her have large breaks. Then we shortened the breaks for a few days. Then we just put the aid back in every single time we saw it out. And we didn't say anything to her about it, we just put it back in. And that worked. Although she can only be but so cooperative. When the wearing of her aid increased, the wearing of her HMEs (heat and moisture exchanger) decreased.

Here's what one looks like on her... (this picture was taken right before her jaw surgery in December). 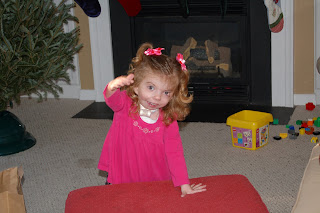 So, that's been challenging. When she goes too long without wearing an HME she gets all dry and sticky and that means plugging, which is not a good thing. But we just keep putting one back on and hopefully she'll stop fighting that fight soon.

Anyway, back to her hearing appointment, Ann turned up her hearing aid volume by two decibels. I have no idea how that translates. But I do know that I when I put it up to my ear it sounds loud to me. We go again in two weeks. And I think she will test her at that time, too. I'm anxious to get some sort of measurement for comparison. Then again, the more information I have the more I have to think about.

I haven't mentioned her hives in a while. Just a few days ago, I thought I would see what would happen if I didn't give her the allergy med. Unfortunately, by bedtime, they came back full force. She was definitely itchy and uncomfortable. So, we'll just have to stay on the allergy med for longer. I guess every couple of weeks I'll try again.

So, I'll leave you with a picture of Murphy and Cooper from this morning. I can't get over their hair. Well, I guess I should say their cowlicks. I'm looking forward to summer buzz cuts... 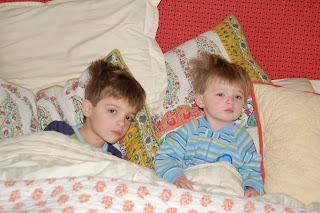 Yea! So glad to hear she's wearing the hearing aid without a struggle! Odd about the HME. Oh, wait. I wonder if she doesn't like the sound? Hmm.

1. Adorable pictures. Love the boys cowlicks and Harlie looks like Cindy Loo Who in that pic.

All 3 children look so precious! I can't believe Harlie's wires will be off next week! Too bad about all that snow..we are getting more today too. But we are kinda used to it! Way to go Harlie on wearing the hearing aid..I hope she is just realizing how much it will help her, I will be anxiuos to see how the testing goes.

Hooray for all the hearing aid progress!! And tell Murphy he is welcome down here anytime to play with the boys. We are getting plenty bored. There's only so much you can do inside... And our car is in the shop!! aahh! Take care!