Yep. That was today. Harlie's first day in a structured environment. Here she is walking toward the school: 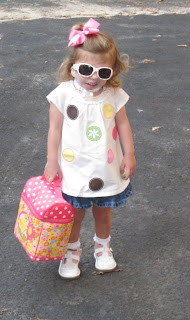 Brandy stayed with her the whole time, of course. She goes from 9am to 1pm on Tuesdays and Thursdays. I was thinking that maybe she would be somewhat cooperative with eating, so I packed her some food. I was hoping that being with the other kids during lunch would help her want to eat. Yeah, it didn't work. She's in quite a slump with oral feedings. But that's for another post some other day...

I will admit that the craziness of the day made me question my decision to put her in preschool. It adds a whole lot of stress, planning and logistical issues. None of which I need more of, trust me.

She was so excited to see the guinea pigs. When she saw them she signed "bunny" and "cat" and I think some other animal. I guess seeing the animal for the first time was a little confusing. 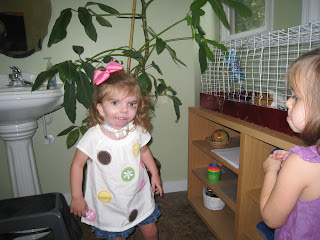 When she went to the easel she kept saying "write". Funny, because I had no idea that she even knew that word. Which is why I say she needs a more "formal" education. It is hard to teach when you don't get the constant feedback that she's learning. I mean, I know that she is, but it's just not as obvious. 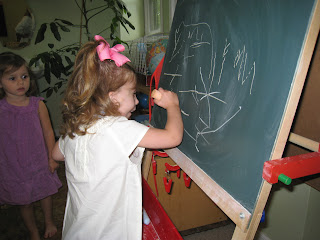 Brandy said she loved this workstation. 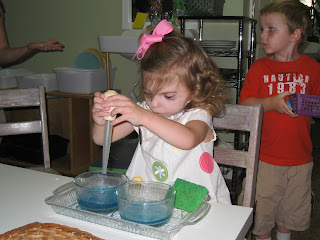 It looks like she enjoyed cutting the wooden fruits and veggies, too. 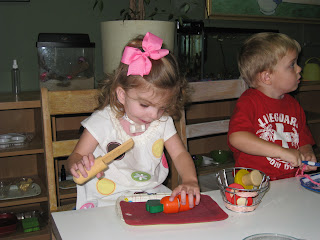 Overall, she did well, I think. She doesn't like cleaning up. But, that's not news to us! I'm very anxious to see how long it takes her to get on board and start doing it without putting up a fight. She's very independent. She walked right into the class and made herself at home. No issues whatsoever with me leaving or with seeing all the new kids.

I asked Brandy about a million questions. She said that the first time she had to suction her caused some attention. The kids came over to ask what that was and what she was doing. But, they seemed satisfied with the answer that it helps her breathe. One of the little boys was in the school last year with Murphy. He had seen Harlie before when I had her to pick up Murphy on occasion. He told Brandy that he wished that she didn't have that thing in her neck so that he could know what she was saying. That is just so darn sweet. And I wish the same thing, too!

And with our new routine today, Cooper had a hard time keeping up. 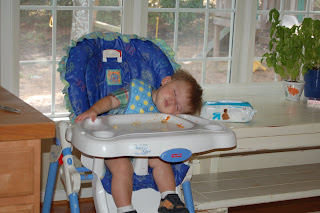 After we got home both kids were wiped out and went right to sleep. And Harlie never takes a nap anymore. So hopefully that's a good sign that she did a lot of learning!

Email ThisBlogThis!Share to TwitterShare to FacebookShare to Pinterest
Labels: preschool

Wow! Sounds like a great first day! Love that the hair bow and sunglasses were part of the first day of school outfit. Can't believe 3 is just around the corner! Congrats to all -

Can I tell you how proud I am!!! Harlie just looks so grown up and, as you said, so independant. That is what our HARLIE is all about...that is why she does so well in all that is expected of her because of that wonderful "no one is going to tell me what to do" attitude. God Bless Her. And poor Cooper...just wiped out! Nap time may be a time for you and Brandy to either rest up..or get alot accomplished. I am so glad all went well. Love to all.

OMG!! She looks so grown up. Love the whole first day of school ensemble. Could she be any cuter? Look at her just jumping right in. She looks like she's been going to school for years!

YAY!! Look at her, love the shades Harlie!!

so glad she had a great day! she is going to love it, I just know it. and the picture of Cooper- HYSTERICAL!

Look how grown up she is! She is having a wonderful time, these photos are fabulous!!!

Awesome pictures Christy! She looked so darn cute!!! Gotta love how the whole new routine didn't seem to phase her a bit!!! She's already so smart it's going to be real fun and interesting to see what she's going to learn this year!!!

Preschool. Where did the time go. She is so grown up and so well adjusted . . . she'll be cleaning up in no time! Give her a big hug for me.

She is such a rock star! Way to go Harlie!! So glad to hear everything went so well... She looks like she was having a great time!

It looks like a great place and she had a great time. I'm so glad. That HAS to make you feel GOOD!