Unfortunately, things took a turn for the worse again.

Harlie continued to struggle all day. It was agony to watch. Her episodes were panicked. She would look at me with these wild eyes like she was trying to tell me something (probably help me). And she would reach out her hand - ugh. It was truly awful. So, so hard to see her like that. Communication was in gestures only. She was sweaty and exhausted and working SO hard to breathe. All I could do was tell them I was worried. This was officially the worst she's ever been. On post-op day 2, we left "been here before" and entered "I've never seen this before and its scaring me." They ended up giving her some sedation meds to try and calm her down and Fentynl for pain.

Once she seemed calm (6:45pm), we left for dinner. At 8pm I called to check on her. Her night nurse said she was calm at the moment and she would call me if needed. So, Maggie and I headed back to the hotel.

At 9:40pm, I got a call from the hospital. The ICU doc called to say Harlie had taken a turn for the worse and that he was concerned and needed me to come in. In all her years (11 next month) I have never gotten called back to the hospital.

The second I hung up the phone, Maggie requested an uber and we ran out the door.

We got there like 8 minutes later, and Harlie looked truly awful. It had become somewhat emergent that they re-intubate her to be able to ventilate her better and give her body some rest. And that they were taking her to the OR soon. I signed all the consent forms and struggled to be patient.

Dr. Padwa came in, as did another one of the plastic surgeons on her team. Dr. Padwa was getting in bed when she got the call, and she rushed in. Love her!  And I love that they both came in and care as much as they do.

It felt like forever till they finally took her down. While waiting I jokingly asked the surgeons how they ever have a life if they come in for their patients like this. Dr. Padwa said this doesn't normally happen to their patients. I said, "you mean not everyone is like Harlie?! I joke when I get stressed. And I was so super stressed. They just couldn't take her fast enough. 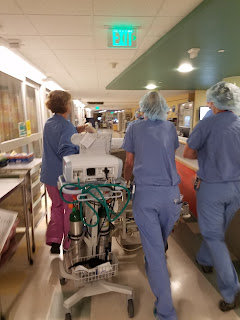 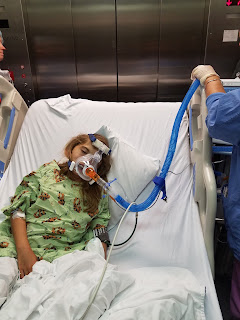 The team was so annoyed. I jokingly said, "what was that elevator number?" And a woman said, c290, or something like that and was already on the phone with maintenance telling them they had a critical patient in a broken elevator.

We walked her as far as we could go, then went to the waiting room. The doc said it would probably take 15-20 minutes.

Soon after that an ENT doc came in to introduce himself and tell me that he was there as back up, just in case.

Just a few minutes shy of midnight, the ICU doc came out. I tried to read his face. He said she was fine (whew!!!) But, that they had to give her a tracheosotmy.

Do you know what happened on August 11, 2015? She was decannulated (meaning the trach came out). And two years later, minutes shy of her 2nd Decanniversary, she was re-trached.

I just can't believe it. There are 365 days a year. And she got decannulated and re-trached on the same date (minutes shy, I should say).

He said he had considered attempting to re-intubate her bedside. He was so glad he didn't because she wouldn't have made it.

Removing the bipap mask made her unable to breathe, meaning that the doctor only had 10-15 seconds to try to intubate her. She said there was too much swelling, blood and irritation to do it in that time frame. They would stop, put the mask back on and let her recover. With each attempt, she deteriorated faster and took longer and longer to recover. In addition, each "recovered" point became less and less ideal.

They tried both her nose and her mouth, two times each, I think. Then it became too risky. They were gravely concerned that her heart and lungs just wouldn't be able to handle any more stress.  The team worked together to make sure they had exhausted all options. No one wanted it to come to this. But they had no choice.

Considering how feisty she is, they have to keep her sedated until they can do a trach change, in five days. If she were to pull that trach out, it would be life threatening. So, they stitched it in and are keeping her under.  While I hope that this is temporary, of course, they said we would most likely go home with the trach. But I can't think about that right now.

Her lungs are so done and need some time to recover. Can't remember if I already said that they believe she aspirated blood and her lungs are angry.

It was very hard to call Tom and tell him. And I am so afraid of what Harlie is going to do when she wakes up, and realizes she has a trach again. All I can think of is how she was trying so hard to do a flip under water in the pool. It breaks my heart to think of it.

I am trying so hard not to be sad (which is both ridiculous and impossible). But, fearing her loss as those minutes ticked by was agony. I'm so sad that she's so sick and that her body is so incredibly fragile. But I am more thankful than I could ever express that she's safe in the hospital right now.

This team is amazing and I am so grateful to each of them for working so hard for her. They moved her from a private room to an open bay so there is more room for stuff and so she can be more closely monitored. 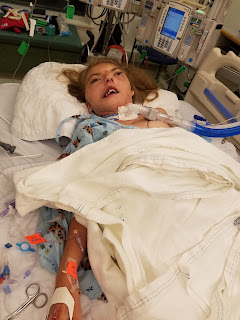 Once she was settled and I had answered all questions, Maggie and I left the hospital (2am). I couldn't sleep. It is just so hard to believe that she was at her all-time best on Monday, and at her all-time worst by Thursday.  We are truly devastated.

But, we will figure this out. Day by day, hour by hour, if need be.  I have hope that she is finally getting the rest her body needs and that soon she will start to get better.

Tom booked the first flight back to Boston, which isn't until tonight. It will be good to have him here for the weekend. Clearly, I have no idea how long Harlie will be here.

So, it sucks for sure. But she's here and that's what matters most. Please don't worry about us. We will get through this. We are not out of love nor fight, especially Harlie. She's already got a reputation around here for being such a fighter.

Thank you, from the bottom of our hearts, for your love and support.

I'm a longtime reader, and it pains me to know that one of the potential unwanted outcomes has become reality. I'm sure that has to be so tough for you, given that Harlie has come so far since decannulation. On the other hand, I'm sure you are grateful that they were able to do *something* to stabilize and help her.

I'm sending out positive vibes for healing and comfort for Harlie, you, and your family. She is an amazing girl.

I'm so sorry that this surgery hasn't gone as planned. I have been around since the trach boards and your story has always inspired
Me. Harold and your family handle all these obstacles with strength and grace. You are all in my thoughts and prayers.

Sending prayers for happiness for this strong girl n family ��

Longtime reader... I just wanted to say I'm thinking of you guys and hope she's on the mend soon. I'm sorry you all are going through this.

As much as I hated seeing my daughter trached years ago, I have to admit the improved airway helped her so much. Thoughts & prayers to you all. Love from the McCullagh's