Today marks two full weeks since we got here. And there's still no end in sight. Kinda crazy.

Last night I was thinking about where we are and what we are dealing with. So, I tried to make a list.

1. Jaw surgery. We still need to get her mouth moving so we can try to prevent her jaw from re-fusing. It is very hard to make her do another thing that causes her pain. But if we let it re-fuse, then she's gone through all of this for nothing and we'll have to do it all again. Although, there is chance that could happen again anyway. Let'shope it doesn't.

2. New Trach Site. I guess the weight of the vent has put some pressure on the area right below her stoma (the hole that the trach is in) and it is bleeding. ENT called in wound care to help with that.

3. Belly. On Saturday it became apparent something was amiss with her fat graft site. They drained it Saturday night and have packed it with gauze, as it will heal from the inside out. They have changed the gauze once each day and will continue until it stops draining, I guess. I watched both times and it is neat and gross at the same time. I just figured if she has to go through it, I should have to see it. They made the incision in the belly button, so that's where the gauze goes. Let me know if you want me to describe it in detail. Haha!

5. Lung issues. Her lungs are still not well enough for her to breathe on her own yet. This is progressing at a very slow rate (the slowest I've ever seen). I'm sure it's compounded by getting a new trach and having to be kept under anesthesia for five days.

6. Pain Management.  They are on top of this with Oxy and Tylenol scheduled around the clock. And are able to give Morphine, Fentanyl, Versed and Ketamine for pain or sedation (for her belly wound treatment) as needed. Eventually, we will have to get her off all that stuff. But for now, she cannot get better if she's in too much pain. The belly site is what took us back a few steps. I might've already mentioned that when she was in pain she was breathing more rapidly and taking shallow breaths. That will not help her lung situation. Plus, she hasn't peed all day, and that can be another sign that she's in pain.

7. Pressure Sore. Still trying to keep her moving so it doesn't get worse.

8. Tooth extractions. Ten teeth were extracted, two were buried permanent teeth, and eight were baby teeth. Then one permanent tooth fell out. Dr. Haas put braces on the front bottom teeth to help stabilize them and help them heal. Today he looked in her mouth and said the extraction sites were "healing nicely." First time I've heard those words this admission, so I will soak that in.

I think that's it. I hope I didn't forget something.

As far as what's happened today...

Physical Therapy came and got her in a chair. Now that we know how painful her belly is and was, I thought her wheelchair would be too uncomfortable. So her nurse went and got a nice reclining chair. At first she didn't want to do it. But once she was in the chair, she hung out for a while. 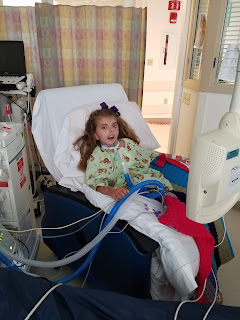 Dr. Haas came around 10:30am and changed her dressing and gauze in her belly. And he stretched her jaw. Since she was on Ketamine (feeling no pain) for the dressing change, we took advantage of the situation and he was able to go up to five sticks! So that's great. She kept the sticks in for at least 30 minutes. 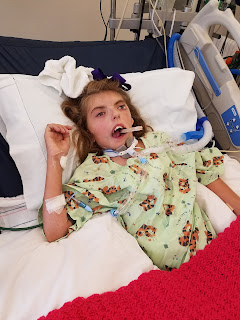 Speech therapy came by, but she was still a little zonked from the Ketamine. So they are going to come back tomorrow.

Infectious Disease came and said they are still treating her for the bacteria they found in her blood on the 12th. They haven't gotten any results from the blood they took from her belly Saturday night. But since she was already on antibiotics, that makes it harder for new stuff to grow. So, they are going to continue to treat her with broad scope antibiotics for a while. Not sure exactly how long yet.

When they rounded on her this morning, I asked them if they could help me out regarding this whole trach training and education nonsense. I was running out of politeness, and like my friend Ann said, it is like salt in the wound. And this has nothing to do with the people, they have been nothing but nice. But, hospital trach care is very different than living with one. And I did for nine years, shouldn't that give me some street cred?? ☺ I also told them this kind of information is neither applicable nor helpful (and I'd go so far to say that it feels insulting): 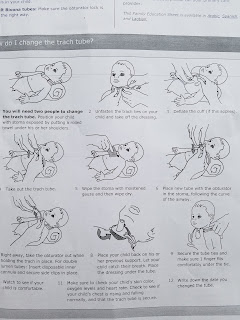 She is almost 11 years old!! Been there, done that, and I have the grey hairs and PTSD to prove it! They were very understanding and said, yes, they would take care of that for me. Whew!!! I am so glad. I thanked them profusely and promised I would ask questions when I needed to.

They also said they were not going to do any trach collar trials again today. She's still not ready.

Occupational therapy came by and got her working on an iPad. So, that was good. After her nurse changed her top belly dressing (it soaked through in just a few hours!) and the wound care nurse and I changed her trach ties and dressing, we set her up to watch a movie on her tablet. 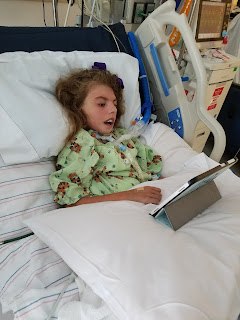 Sandy is heading back to VA tonight. I am going to walk with her back to the hotel to get her stuff and an Uber and then I'm going to go for a run while I'm out.

So, again, another day when nothing bad happened (hopefully that won't change) and small improvements could be seen. She still barely nods/shakes her head, but she's fighting the nurses and doctors more, so that's good.

Apparently, there was a solar eclipse today. I had zero interest. Hard to care about other stuff when I'm here and focused on Harlie.

It is now 7pm. I went for a run, showered and returned to the hospital. When I got back I said hi to Harlie, and she signed, "I love you!" Can you believe it?!  So, that's awesome. I'm super happy about that.

No new setbacks, and I feel like I'm starting to see a bit more of her each day. We are getting there, even if we are crawling.

Thank you for your continued love and support. I appreciate it more than you'll ever know!

Please let Harlie know we are so happy with this news and we are praying for her and your family, God will continue give you the strength and her his grace each minute of the day, keep up the fantastic work, from a friend of Grandma Mary Ann

We are praying for her and all the family!! She is one of God's special earth angels who is teaching everyone by her example just like you are. You have taught me so much with your wisdom and patience!

Great to see her trying to smile! Still in our thoughts and prayers. Lots of love xx