Hi! I was way too tired yesterday to write, so here is a recap of yesterday.

In the morning, when we came around the corner and headed to her room, a doc stopped us and asked if we were Harlie's mom and dad. He was an ENT doctor. He said the plan was to extubate her that morning (they had been able to wean her breathing support settings down to bare minimum) and that he was asked to be on standby, just in case. So, he had some questions about her airway and her cervical spine issues. It was so weird because I haven't been asked about her cervical spine in years, nor do I remember which vertebra is fused.  Anyway, he said that if they extubate, and she can't handle it, and they can't get it back in, that he is prepared to trach her bedside. While that was a bit unsettling to hear, I didn't think it would come to that. Can you imagine? Awful to think about. 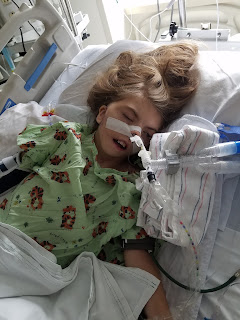 Anyway, all went well. It was a little crazy waiting for anesthesia. They wanted her to be asleep until they showed up, then awake immediately, so tiny amounts of drugs were given often. She woke up when they were told anesthesia was 2 minutes away. So, we got to say hi and tell her the tube was coming out. Tom told her to be brave and she shook her head yes.

While it was awful to watch, all went great and there were no emergencies!

This whole process was a brand new experience for us. If she still had her trach she would receive all the breathing support she needed with no drugs and could be awake and happy. Which is how it normally was for every single surgery she's had so far.

Also, keep in mind that her last surgery here resulted in big pneumonia and she was on the ventilator for like 6 days. I just didn't want that to happen again, especially while intubated!

Anyway, her voice is very soft and weak. So you have to be close to her to hear. And usually we have to ask her to repeat herself, so sorry Harlie! She asked Tom, "Daddy, when can I sing again?" What I wanted to say is, "You really couldn't sing before..." haha! But boy, does she like to try.

Maggie flew in that morning. Coincidentally, she is dating a guy who lives in Boston.  So he picked her up and we all met at one of our favorite restaurants (the Squealing Pig) for lunch.

That afternoon, Dr. Padwa came in and showed us how to use the therabite. That was agony. But she said we have to use it as much as possible or we will end up in the same position. 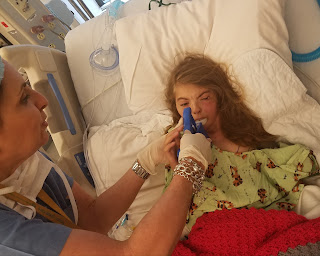 Somehow I need to come up with a way to show Harlie what it's doing. If she understands I think that might help her be a willing participant.

I ended up telling her we will do it once every hour. And by 8pm, she was tolerating 2 squeezes for 10-12 seconds per squeeze. A huge improvement in just a few hours. She is such a trooper.

Well, Tom left tonight to go back home. So, that's sad. Luckily Maggie is here so that's good. We all went to an early dinner together at a pizza place called Otto. 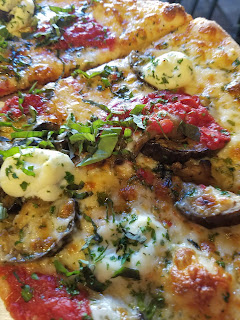 While it was so good (eggplant, ricotta cheese and fresh basil) I had a hard time eating. I just feel like I'm super nervous (even though I'm not). Honestly, I think it's PTSD. My nervousness and anxiety comes in waves and not necessarily in times that make sense. It's weird.

Her night nurse had to pull out one of her IVs. Harlie told her to come back at midnight, when she was asleep. Haha! I told her she would wake up and that would be worse! So the nurse took it out. She left the room and when she returned a few minutes later, Harlie looked at her angrily and said, "you should've done it at midnight when I was asleep." Haha! She is something.

So, we did the theabite 2 more times and gave kisses goodnight. Today was a good day. She was extubated, then she was able to come off oxygen. They said she was staying in the ICU tonight and We'll talk about tomorrow, tomorrow.
Here is the last picture I took. For some reason, I love it. I think she is amazing. 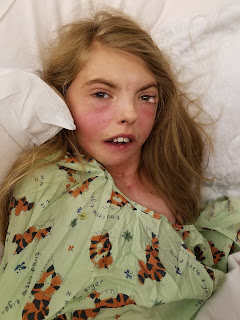 Thank for all the love and support!
- Christy xo