The MS 150 was this weekend.  It is a cycling event to raise money for Multiple Sclerosis.  It starts in Richmond and they ride to Williamsburg on Saturday (75 miles), stay overnight, then get back on their bikes to ride back.  They have an option to add a 25 mile loop on the way down there.  And, of course, Tom did.
He did great.  Here he is coming into the finish on Saturday. 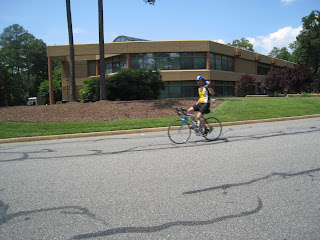 I had no idea how long it would take him to get there.  I got there at noon and quickly realized that there were only a few riders in.  So, I went to find a place to cheer him on.  I guess I was expecting something like a running event, with people lining the street.  I was wrong.  There were lots of volunteers.  And one woman sitting on the curb (more people arrived later).  So, I went and introduced myself and asked if she wanted some company while waiting.  We talked non-stop for two hours!  We never ran out of subject matter.  It was great and I can't tell you how much I enjoyed that.  How often do you get to meet a complete stranger and just sit and talk for two hours? 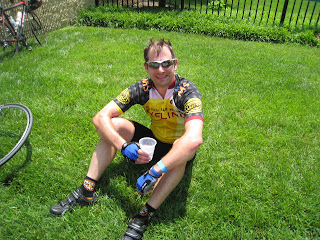 It is a small world.  At the start, Tom ran into Murphy's kindergarten teacher, Mrs. W.  Here they both are after the first day. 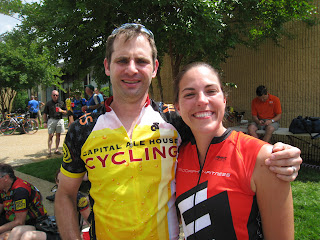 Here are some of Tom's teammates, Hank and John. 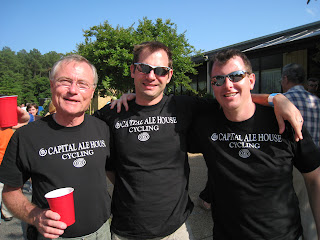 Tom and I enjoying some hanging out time with uninterrupted adult conversation and beverages.  It was a lot of fun! 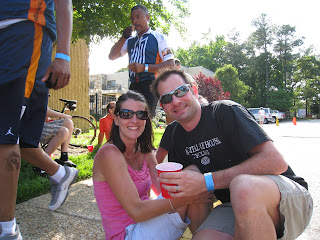 Tom and I at the bar of the hotel after dinner. 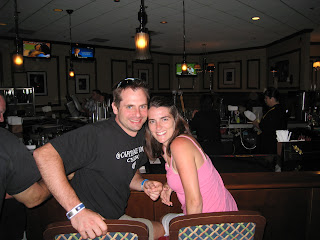 It was an early night since they had to leave at 7am to ride back to Richmond.  I leisurely awakened, and took my time to get back on the road myself.  I even stopped to eat breakfast - in a restaurant - on my way back.  It was great.  Again, I didn't know when he would get back to Richmond.  So, while I still had a nurse at home, I stopped off at the finish to see if I could catch him come in.  I missed him by five minutes!  Bummer! 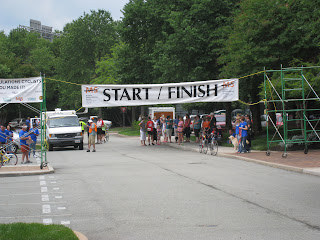 The ride is officially over - after 175 long miles!  He says he feels surprisingly good.  But he needs new bike shorts - with better padding in the bottom!  Poor guy. 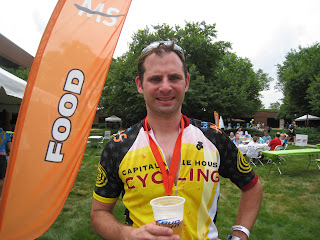 I was worried that all the logistics of getting myself down to Williamsburg would turn out to be more trouble than it was worth.


Here's what had to happen:


I got up at 5:45am, and got myself ready and packed, packed all the bags for the kids, made Harlie's breakfast (had to make some cream of wheat, let it cool then puree it and mix it with some pureed peaches), and fed her and the boys.  At 9am, Nurse #1 came over to pick Harlie up for the day.  At 9:45 I took the boys down to my neighbor's house for them to spend the day with their three boys.  Thanks, B and G!!!!


At 7:30 pm, B brought the boys home and met Nurse #1 bringing Harlie home.  They got the kids ready for bed, and B left and Nurse #2 arrived.  Nurse #2 stayed the night.  And then Nurse #3 arrived in the am to take over.  And another neighbor helped out with the boys till I got home.  Thanks, C!  Whew!  I think Murphy was a little confused.  But I think my kids will turn out to be very flexible individuals one day.  And I don't think that's a bad thing.


So, I'm sure you can understand how I would think that it might not be worth all the trouble.  Especially since I hate planning!!!!  That seems to keep coming up.  I guess it might be in my best interest to try to like planning a little bit.


Anyway... It turned out to be worth it.  We had a great time.  It was so much fun to meet new people and to get to know the guys that Tom's been training with these last few months.  And it was great to be able to celebrate this accomplishment with him.  I know that if I did something like that I would want him there.


So, a huge thank you goes out to all those that helped to make that happen.   I do think it is good to be apart from your kids every chance you get now and then.  I got the best hugs EVER from Harlie this afternoon when I got home.  I am so thankful to Cooper for her new found hugs.  She learned how to hug from watching him hug us (Cooper is such a snuggle bug).


Oh, I almost forgot the best quote of the day!  On Saturday when Tom went to shower and change clothes, I went to get my stuff from the car.  I forgot my phone charger, so I plugged it into the car charger to call and check on the kids.  B told me that they had a good time at her son's soccer game.  She later asked Murphy if he would like to play soccer.  He said, "No, my family doesn't care too much for exercising."

Email ThisBlogThis!Share to TwitterShare to FacebookShare to Pinterest
Labels: MS150

Love it! The boys were gems and made our Saturday so fun! Congrats to Tom on 175!!! and to you both on getting away for a bit. Much deserved on all fronts!! Next time--Hawaii!

Congratulations Tom! I know that was a lot of hard work, so it should be celebrated! Funny, funny quote from Murphy, by the way.