So, Harlie and I drove to DC this morning. We had to be at the hospital at noon. But, she needed to have water at 11am. Her procedure was scheduled for 2pm. And because of her cardiac issues, they want to make sure she's hydrated.

Oh, how different traveling in a car is with her now that she's older and so much more independent! I just place her suction machine so I can turn it on and she suctions herself! And, she can tube herself water, too. 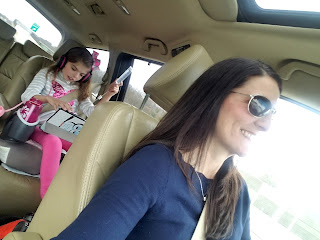 Traffic was light and I made it in less than two hours! Woohoo!

We got all checked in and waited for a while. This is her new wheelchair I haven't been able to tell you about. 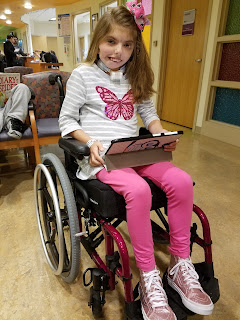 We got it about two weeks ago. It has a smart drive thing that I can click into place under her (a motorized 5th wheel). I didn't have it on today because she's still learning how to use it. She wears a bracelet and it connects via Bluetooth. When she taps her wrist to the chair twice, it moves and will accelerate in speed until she taps it once to lock in the speed. And then she just has to steer it by applying friction to the wheels. Then, to stop it, she taps her wrist twice again.

It is going to be pretty cool, I think. She just needs more practice. And the smart drive weighs a lot less than a motorized chair. So, I can still lift the chair and get it in the back of our van, which was a must!

Anyway, her pacemaker has to be adjusted before and after every procedure. This is her holding the pacemaker thingy while Carol made the adjustments. 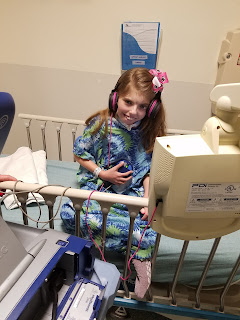 They finally took her back at 3pm. She told me she was scared, but she really didn't look like she was at all. She went away smiling and signing "I love you" to me. She is such a trooper!

Sometime after 4pm, Dr. Preciado came out to talk to me. I'm struggling to fully understand what he told me, so relaying it to you is especially difficult.

He said he understands why I'm having a hard time doing trach changes. There is a ridge of some sort off the back of her trachea that the trach is getting caught on. It requires a bit of pressure for the trach to finally break free from it before it goes into place. This clearly hurts her, causes a lot of irritation and I guess can build up scar tissue. And we can't let it stay this way. He doesn't want us to have to do many trach changes. Man, I am feeling so good about my decision not to change it these past few weeks!!! Go me!! I absolutely love it when my instincts are right because so often I do dumb things. Like this morning, on my way here, I went the wrong way, and had to drive several miles before I could turn around and go the right way. I've only driven here a thousand times, so that's totally understandable, right?

Anyway, he said that when I do a trach change, I need to stand behind her head while she is laying on her back and insert it in a forward motion, vs. standing in front of her and inserting it in a downward motion. Basically, I need to stay to the front of her trachea. That probably doesnt make any sense to you. Well, it sounds strange to me, too. And I'm nervous just thinking about it. Ugh!!!

I asked him if this ridge could be removed, but it is not that simple. Honestly, I don't remember what he said, but it wasn't easy to understand. He said that what she really needs is a stoma revision. The stoma is the hole in her neck. And the whole area is friable and easily irritated. She has a couple of keloids now, too. All new territory for us. Anyway, he said doing an emergency tracheostomy is very difficult and her body is not reacting/healing well. I'll say. That emergency trach was done almost six months ago! So hard to believe it has been that long. I feel like so much has happened in such a short time. Anyway, he wants to re-do it, basically.

Of course, there are no guarantees it will work. And the back up plan is that he might have to put an adult trach in. An adult trach has an inner cannula that you take out and clean, while the outer piece stays in. That way we are not having to insert one all the time. That has its negatives though, so we are hoping it doesn't come to that.

So, we have to give this stoma revision a try. This will require a week's stay in the hospital. And he says it needs to be done sooner vs. later. This is a major bummer. Anyway, he is looking at adding her on in mid February. We will see how that turns out.

He ended up putting a Bivona 4.5 in. The Bivona is more flexible. He said that a 4.5 is plenty big enough for her. So, I'm a little worried about her exercised induced intolerance. Maybe the stoma revision could help? I kinda feel like we're grasping at straws here. I must admit that I'm getting a bit worried that we aren't going to find answers.

He said I can take her home tonight. So, I am just waiting for her to wake up. She is bleeding and is in pain when she coughs. Like with big fat, silent tears. So they gave her some Fentanyl. The nurse asked me if she was awake or if she had fallen back to sleep. So, I said, "Harlie, are you awake?" And she shook her head "no." She's so funny.

Oh, how I am not looking forward to spending another week in the hospital. Things really need to start going her way, for crying out loud!

Okay, it is after 7pm and she still looks pretty sleepy...

Thanks for reading and for loving us. We appreciate it more than you know.