Harlie had an okay day. But she sat on the couch the entire day. I'm not going to push her. I think when she's weaned off the oxygen during the day again, she'll start to want to move around. I think when she's hooked up to oxygen she thinks she can't walk around. We weaned her from 4 liters to 2 liters and then in the late afternoon, I was able to take her off completely for a few hours. She was hooked up to the pulse ox all day so we could see what was going on with her numbers.

She doesn't like that she is drooling. A lot. And that's an understatement. It literally is a constant drip. She can't seem to move her lips yet, so that doesn't help. And if I jet my chin out and try to put my bottom teeth over my top - it is extremely difficult to swallow. So, I'm thinking she's not doing much of that. So, we've had to pull the bibs out again. But she is still soaked within minutes. Even staying on top of changing the bibs, we still had to change her shirt five times today. 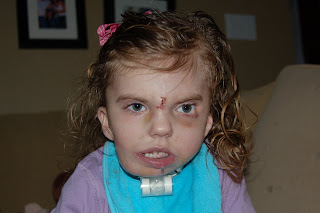 I don't know what's up with the right side of her chin being so much bigger than the left. Guess I'll find out when we go to get the wires taken out - in 8 weeks!

She finally interacted with me a little today (I'll take anything at this point). I gave her the movie book and she actually sat up and picked out a movie to watch. Then she patted the cushion next her, inviting me to sit down. Awww! She just might be coming around!

Murphy had a difficult time with her today. He was playing in the playroom and me, Harlie and Cooper were watching a movie together. I told him he could bring what he was playing with into the living room so he could be with us. He said, "No thanks." I asked him why. He said, "Because I don't want to see Harlie today".

I certainly don't want to push him, but I don't want this to last any longer than it has to. It's painful for all of us. He eventually came around and played in the same room. But, didn't play with her, or interact with her. She doesn't appear to care. When Tom got home we talked to Murphy about it. Even though we've talked a lot about it, before her surgery and after, he just needs some time to get used to her. I think her eyes are starting to look more like her already. By the time we were done talking, he signed "I love you" to her. Of course she ignored him - as she has with me the 10,000 times I've told her since her surgery. Then he went and drew her this picture. 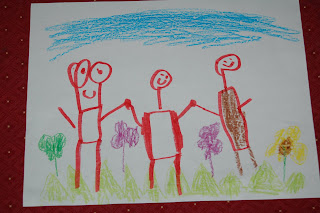 It is Murphy, Harlie and Curious George. It was pretty cute because she took the picture from him, clearly studied it, and then handed it right back over - with no expression change whatsoever. Granted, right now, I don't think she can change her expression. But it was still pretty funny.

I love that they are holding hands. I am amazed at how detailed his drawings are getting. They have improved so much in such a short period of time.

The drawing is precious and so loving of Murphy. Don't worry, he will come around. After spending the last 10 days with those wonderful boys, you have no problems...they love their sister and though it may be hard right now..in a few days your family will all be back to normal..for you!

What a sweet picture for Murphy to draw for her! And I love that Harlie patted the couch cushion next to her for you to sit down. She'll be back to her feisty little self in no time. Can't wait to see you guys next week!

She looks GREAT! And, I'm actually pretty impressed with how good her hair looks and how much they were able to save in the front. It gives me hope that things won't be too bad for Ainsley in January.

I'm glad she's coming around. Another day or two at home will do her a lot of good. Hugs to all.

Christy,
I continue to admire the strength of Harley and your family! You guys have been through so much and know that you are constantly in my prayers. I'm glad that she is doing well and on the road to recovery.Please let me know if I can help in any way. ~Shannon