We have another surgery date.

Late Friday afternoon, I got a call from Harlie's plastic surgeon's office. She said that Dr. Magee had a cancellation and he could do her jaw reconstruction on, gulp, DECEMBER 9th!!!! We were thinking this surgery would happen sometime around February.

It's just kinda weird to think about it being so soon. Maybe I'm in shock. I need time prepare - mentally. And right before Christmas?! We were supposed to go to Pittsburgh the week before Christmas. Now that won't happen. There's no way she'll be able to travel that soon after surgery.

But, I don't see how we can pass up the opportunity. And I guess it's a good thing that I won't be able to spend the next several months thinking about it.

Luckily, Tom's mom can come down to help us with the boys. And it's better for Tom's work schedule to do it in December vs. February. So, hopefully that means he can stay with me the whole time she's in the hospital. If I remember correctly, she was in for just about three days last time.

Uh oh. I just realized that she needs to get that G-J Tube before she can have the jaw reconstruction. Hmmmmm. I wonder if I can pull that off. I think they do it radiology? So, maybe that will help? Ugh. That will definitely be the first call I make on Monday.

Anyway, so early this morning my friend, Natalie and I were on our way to meet our running group for our last pre-race run, when we were rear-ended at a red light. We were just sitting there chatting and BAM! There was no warning. No brakes screeching or anything. Which, honestly, I think was to our benefit. We were relaxed when we were hit, which I think is a good thing. His car was pretty crumpled and both his air bags deployed. 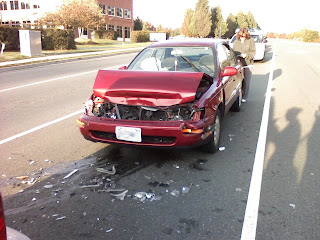 Natalie's car appeared to have just minor damage to the bumper. But when we drove away, there was definitely something going on underneath the car. We didn't make it to the run, which I guess wouldn't have been that smart to run right after that anyway.

We are fine, by the way. Just some lower back stiffness, which I really think will be fine in a day or so. Now we just have to hope that nothing like this happens on our way to the race! Missing the race would really be VERY disappointing after all the training we've done!

Well, that's it for now.

A date! Yea! Wow, that's just a month away! It's always weird when it's sooner than expected. I'm sure you'll be able to get the G-J in time. I'm so glad to hear you're okay after that accident. How scary.

Well okay, hey - let me know if you need anything to get you through December. SO glad you and Natalie are okay!

My God, woman. I don't take the time to catch up on blogs a few days, and all kinds of things happen - surgery dates, accidents, whatnot. I love how you don't even mention it when I see you... dork!