Just a little family video for you...

Seriously, let me just say that I am super glad that Halloween is OVER!

And it's a shame, too. As a kid, Halloween was one of my favorite holidays. Mainly, because I LOVE candy. And that's no joke. I seriously can not live without it. Period. So, Easter and Halloween rank pretty high up there for me. And as a kid, my parents made Halloween fun. We made our costumes. And they were always creative and fun.

One year I was a bag of jelly beans. Told you I love candy. I don't know whose idea it was - mom or dad? But, they took a clear trash bag and cut some leg holes so I could be in the bag. Then stuffed it full of balloons. Then they made a sign that said Brach's Jelly Beans or something. Then put a ribbon around my neck. It was pretty cool. I remember every adult going crazy over it.

The other ones I remember were a robot (complete with cardboard boxes spray painted silver and dryer vent tubing for my arms and legs), a butterfly, a mummy, and a devil.

There are some great family stories around Halloween. One I know my mom's going to kill me for telling you about is about my big brother, Bruce. He was in elementary school and he went as an indian that year. Well, my mom dressed him up for school - on the wrong day! So he was the only kid in the school in full costume. And I think it was a day too early - so the very next day everyone was going to school in costumes. It's so funny to hear Bruce tell the story. The other kids asked him, "So, what are you going to be tomorrow?" I laugh hysterically every time I think about it.

Anyway, my whole point is that it makes me sad how little time and energy I can put into being creative for my kids. Just a normal day takes everything I've got. And instead of thinking of something far enough in advance to make the costume, I had to go out a week ago to a store - to buy a ready-made costume. Boring! And not nearly as much fun. But I just can't find the energy to be creative. Or to think weeks in advance for an event. Every day is a juggling act with my schedule - how in the world can I plan WEEKS in advance???? Just thinking about it is overwhelming. And that just makes me sad.

Of course Harlie doesn't make it easy. Well, heck - she doesn't make anything easy. But, she's so freaky about materials - so she won't just wear anything. She overheats super easy. She doesn't get any part of Halloween at all. She can't walk with any endurance and she can't eat any of the candy. She's probably thinking, "what the hell is going on here?"

And it didn't help AT ALL that I had to run 12 miles that morning. TWELVE miles! My longest so far. Although, to tell you the truth - me and the girl I was running with missed a turn and ran four extra blocks. Oops. Anyway, the run was awesome. I felt great and did the 12+ miles in 1 hour and 55 minutes. I am VERY happy with that. And it gives me a little hope that I can run the 13.1 half marathon in 2 hours +/- a few minutes. However, I paid the price that night and was very tired for Halloween. And I had to walk around the neighborhood with the kids. Tom usually hangs around with our neighbors giving out candy.

I say "usually" because he had to throw a major wrench into Halloween. I was just getting the costumes ready at 5:22pm, when he cut his finger washing a very sharp knife. It definitely needed stitches. Which meant he had to leave and go to Patient First. GREAT! He ended up getting five stitches and he took this picture with his phone. He spent the whole night there and missed all the trick-or-treating. 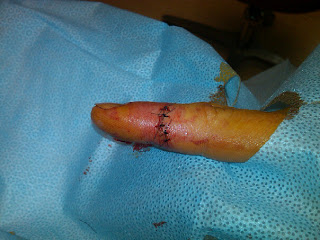 All I have to say is poor Murphy. That kid gets the shaft sometimes. All my tiredness, all my annoyance at the situation, all my impatience at Cooper's busy body and Harlie's suctioning/vomiting interruptions really put a damper on his excitement for the evening. He's the only one that CAN cooperate. So, a lot gets asked of him at times. Ugh.

Anyway, I managed to get them dressed. Although it was a very hot, humid day, so Cooper didn't wear his costume (a dinosaur that was Murphy's years ago). Luckily, Tom's mom sent him a Halloween shirt, so that's what he wore. Getting a good picture of them before we left was impossible. And Harlie wasn't a fan of Murphy's get up. I think he scared her a bit. 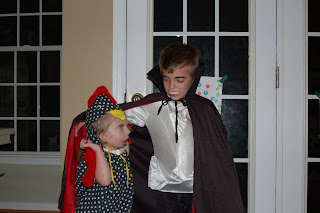 Oh, Harlie was a hen. I borrowed the costume from my neighbor, Cami. She's the best neighbor in all the world... Anyway, I bought Harlie a Super Girl costume (I thought it was very fitting for her). However, she refused to wear it. And she would have roasted in it anyway considering the temperature. But still... (so, if anyone wants to buy a new, never worn Super Girl costume for pretty cheap, let me know). 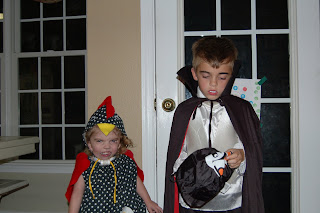 This is me once we were outside and on our way. Tom called to give me a report. I couldn't talk on the phone, hold the bowl of candy, push the stroller, and watch Murphy at the same time. Can you believe that??? What a hack of a mom I am! So, I was probably pretty rude to my dear husband. Sorry Tom! 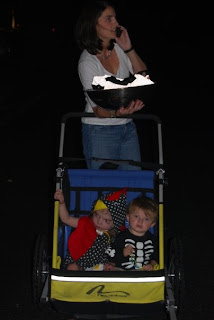 And here's me managing a smile. Everything was fine once we hit the pavement and got going. I think all the kids had a great time. 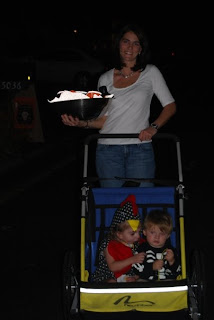 Last weekend our neighbors (Mike and Cami) had a Halloween party. Here are some photos... 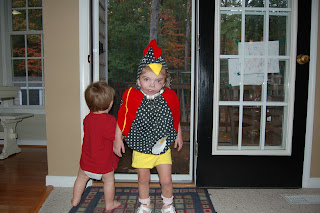 My plan was for her to wear white tights under black covers over her diaper (instead of the yellow shorts) and to put yellow socks over her shoes. How cute would that have been? But, well, that just never happened. And it was hot. I don't know that she would have worn tights anyway. Oh well... 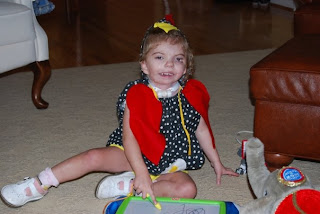 And my favorite picture... 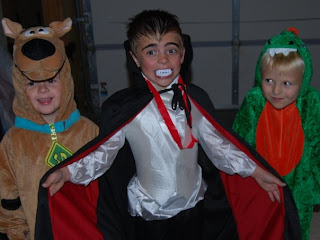 Tomorrow we are off to DC for Harlie's appointment with her orthopedic surgeon. She will go over her CT scans and x-rays and tell us what her plan is for surgery. Hopefully we'll get an idea of when it will be. I always feel better having a date.

Oh! And we have our first parent-teacher conference with Murphy's teacher. I'm so anxious to know how he's doing in school. I haven't gotten any notes, so I'm assuming everything is fine. But I am so ready to hear some details!

I hope you all had a Happy Halloween. And I'm striving to make next year's Halloween experiences for my kids better, more fun and more memorable. I'm just going to add it to my list right here. Oh, darn. Where is that list? It's only 400 items long. I am NOT writing that list out again!

Email ThisBlogThis!Share to TwitterShare to FacebookShare to Pinterest
Labels: Halloween

The light will get brighter.

Good grief! You need to cut yourself some slack. The rest of us would totally think it was an ordinary Halloween by your pictures. (Except for the sliced finger.) The kids look adorable! And what an awesome video! Homemade costumes? Who does that? Well okay, I know one person but she's annoying. I do love the bag of jellybeans costume idea. You know we're all going to steal that?! I'm glad you had a good time in the end. Hope you got to eat lots of candy.

Ditto on what Susan said about cutting yourself some slack. Seriously, you're possibly the most amazing mom I know. And those costumes were too cute!