So, Harlie's Upper GI went well I suppose. She was scared but still cooperative.

They put some barium solution into her feeding tube while she stayed under the x-ray machine. There is a monitor that the doctor watches to know when to take the x-rays. Since Harlie was being so good and cooperative, I was able to stand on the side of the monitor more than I have in the past. Usually I have to stand behind the monitor so she can see me. Anyway, the doctor was great at pointing out what was what and what was going on. She's also the same doc we had in January for her last upper GI. 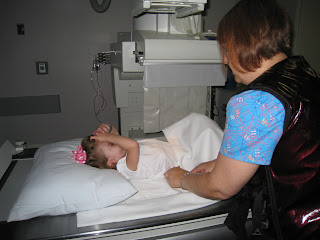 She stayed perfectly still for the baseline x-rays, before we actually started the Upper GI. 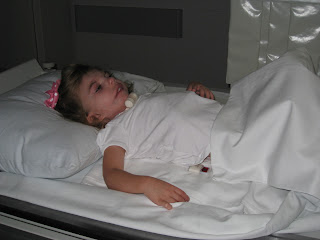 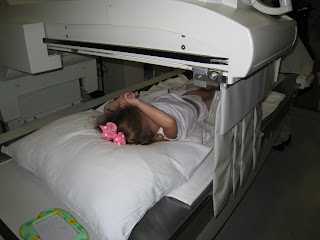 Anyway, for the first time ever (on a study, I mean), we actually got proof that she is refluxing. I mean, we already know that by the fact that she vomits, duh. But, every single time she's had some sort of study, she never refluxed during the study.

Her nissen is still intact, and the doctor said it looked pretty tight. But, some barium still made it's way past it and into her esophagus (but she didn't vomit). I think she got some good pictures of it for her surgeon to see.

Here's the issue: does it warrant having another surgery to make the wrap tighter? If it were up to me - and she didn't need to have another jaw reconstruction - I would say no. I can easily live with the amount of vomiting she does right now. A few times per day sure beats the 40 times a day she used to vomit. So, I'm happy.

Tightening it has some drawbacks (if it's even an option). If you make the wrap too tight, swallowing becomes difficult, if not impossible. And with all the progress she's made lately on that front, we don't want that to happen!

But, it's going to be up to her plastic surgeon. If she has the same surgery she had before, then her jaw will be wired shut for nine weeks and it will be safety issue (aspiration). The surgeon that did her last surgery would not even consider surgery unless she had a nissen. We meet with a new surgeon September 14th for a second opinion. And then after that, we'll have to make some decisions. As usual, fixing one problem, causes problems in another area.

I suppose it's possible to do the wrap tighter (surgery), have jaw reconstruction, wait nine weeks, remove the wires, then undo the tightness of the wrap (surgery). Because while her jaw is wired shut, she can't eat by mouth anyway, so swallowing won't necessarily be that big of a deal (other than her own secretions). But that sounds like a lot to put her through. But, she needs this jaw surgery to move forward. We can't put that off much longer. So, I don't know what we're going to do. I guess we'll just have to wait and see what the doctors say. I'm sure she'll go back on Prevacid. In fact, I went on ahead and did that today.

For the most part, I feel like I'm pretty patient with Harlie's stuff. But, the thought of waiting six more weeks to start the ball rolling on any front regarding her jaw is killing me. If we meet with this new guy and like him and his treatment plan for Harlie's situation - who knows how long it is to get on his surgery schedule. If we decide to stick with her original surgeon, then we'll still have to fix her vomiting - before he'll do it and then who knows when we'll get on his surgery schedule. The same might apply no matter who we go with. And we have to hurry up so she can get her spinal surgery. I have a feeling her jaw might just have to wait. Which also kills me. Ahhhhhhhh!!!!!
at August 01, 2009