I'm having a hard time writing (and thinking) right now. The patient next door to Harlie coded today. I heard the all too familiar sounds of people running and the latch opening the double doors. There was an alarm, but oddly enough, I don't remember what it sounds like. Not from a few minutes ago, and not from when it was for Harlie.

I had a definite reaction to the code. And I had to work very hard to keep myself together. Tom happened to call right then, and he distracted me, which was good. After things settled down, my social worker came to check on me. Which, I'm glad about, because I was having a hard time. She said that's PTSD. And it sucks.

Oh, this is no way to live a life. I don't want this for Harlie or for us anymore. I want to go home. I want the life we had before August. I want her and me, to be free from hospitals and surgeries and unexpected complications. But, I know that's not to be. At least not now. Somehow, we have to keep going. And continue to survive this crazy, effed up life.

Yesterday, it snowed. I rather enjoyed my two-mile walk into work, I mean the hospital. ☺Snow seems to make things seem more peaceful. There was way less traffic, so that was really nice, too. 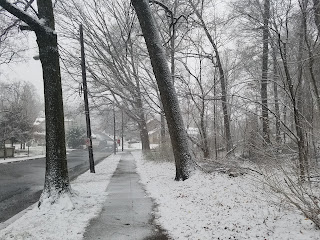 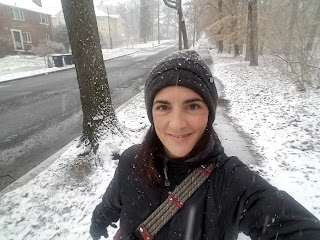 Harlie spent a lot of time in the chair, on trach collar. She stood for 10 seconds, 2 times. Her little legs shook so much! 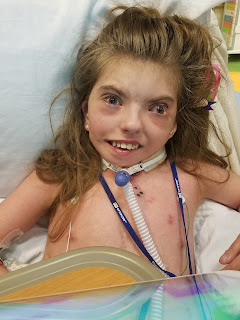 I forgot to tell you that she has developed strabismus. Basically, her eyes aren't tracking the same. Her left one seems weaker. The opthamologist said that it can be from the medications and/or from being paralyzed/sedated for over three weeks. It can stay that way, or get better/stronger in time. So, hopefully, it will get stronger and resolve itself.

After that, she slept the entire day. She's having a hard time sleeping during the nights. So, we tried our best to wake her and keep her awake so she would sleep last night. But, we eventually gave up. I wasn't so keen on bothering her in the first place. And she must be exhausted! So, we put her back in bed, and let her rest. She ended up sleeping till 4am this morning. So, that's good.

Today, as soon as I walked in, they were rounding. They said that ENT and wound care were on their way to do a trach change and do some wound care.

They gave Harlie some Ketamine and did their thing. She has a foreign body granuloma. They left a stitch in, so her body is reacting. It looks pretty gnarly. But, other than that the wound is getting better, overall. The trach has definitely migrated up. But there's nothing they can really do about that. They changed her trach just fine and cleaned the wound. They said they want me to do a trach change with them there, so I know I'm fine with it once we get home.

So, the word "home" has finally been spoken. I don't know when, of course. Right now the following needs to happen:

1.  More wound healing. This stitch has to work itself out, or they have to help it out, at some point.

2.  Her lungs have to get better. She desats immediately without oxygen. At one point during her wound care and trach change, her sats got down to 57.

3.  She needs to get stronger.

I'm guessing another week or two? Time will tell.

After she woke up from the Ketamine, PT and OT came and worked with her again. Today she stood up for 20 seconds, 3 times. So, that's good.


She got in the chair and stayed on trach collar for most of the day. After the code next door calmed down, PT and OT came back to put her in the bed.

She watched a movie and then fell asleep. I think they are going to put her back on the vent now, because her sats are getting low. Maybe she's had enough of breathing on her own for the day.

Well, that's all I want to write for the day.

Thank you for the love and prayers. Still soaking them in, especially during the harder times.

I’ve been following your daughters story and just wanted to say you are an incredible mom and I know how hard it is for you to write these updates and thank you for keeping us up to date. I have and will continue to pray for Harlie to get stronger every day. I pray that you keep up your strength and stay strong. God bless you all!

I've been following your story for many many years. Often I read, and then go to comment, but anything I say feels so inadequate. But know that I pray for you all every day, and I check for updates every day. I hope and pray that you are all home together soon. You are one strong mama and Harlie is a fighter. Sending love and strength...

Keep persisting... I’m so sorry for the code next door. So many big feelings.
Hugs to everyone. Glad to see her smile.

Great seeing her smile and your peaceful walk! You are an inspiration to me with everything you have gone through and Harley is one special earth angel!! Sending prayers to you and your family!!

So happy to hear the word HOME was spoken!! And I’m sorry to hear about the code and how it stirs things up for you - dumb story, but once Faith was recovering from surgery and an “incident” happened in another room, their was lots of commotion and nurses running into a room, I assumed it was a code, but in the end it turned out to be a bed accident! But I was a mess it took me right back to being in the NICU when another code happened and other events with Faith, so I can only imagine how much it stirs up for you and I’m sorry.
Big Hugs!!