Whew! It's been a busy weekend!  I will have to save the blog post about Harlie's triathlon for later tonight or tomorrow.  It went great, by the way!

Since the sleep study is happening now, I thought I would start with that.  First of all, I CAN'T BELIEVE WE ARE HERE AND IT IS HAPPENING RIGHT NOW!  After eight and a half years, we are finally here, seeing if she can breathe without the trach.  Gulp.

Our check-in time was 7pm. Now, I'm used to having to wait well past appointment times to see doctors.  I don't even want to know how much time I've actually spent waiting in a waiting room.  I'm sure it would be depressing.  However, I had NO idea we would have to wait for 1 hour and 20 minutes tonight!  Goodness gracious - knowing that would have certainly changed my schedule for the day.  In the least it would have made driving in heavy traffic to DC a little less stressful.

But, I have to shake it off and move on.

We got to our room at 8:20pm.  And she was done putting all the leads and stuff on her by 10pm.  I was pleasantly surprised at how well she did!  She fussed a little bit, said she was scared a couple of times, but for the most part was cooperative. 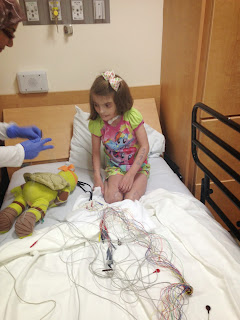 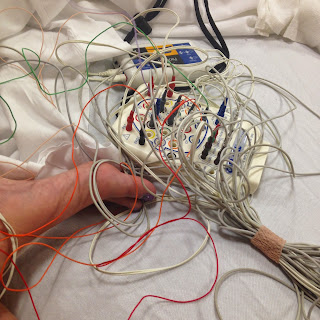 To put all over you, including your head... 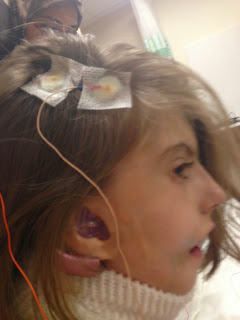 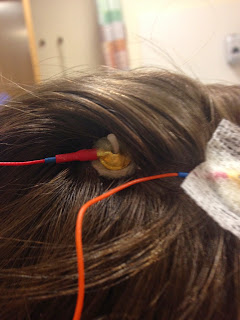 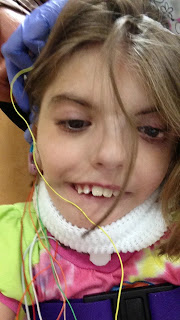 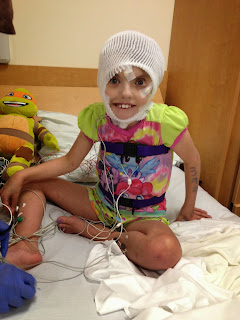 Adding the nasal cannula was the hardest part.  She does not want it in her nose.  If it were Cooper or Murphy, it would have been up there without being asked. 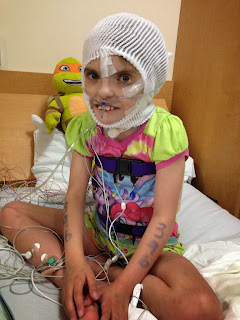 I think she's asleep now.  And she isn't making any noise.  I just hear air.  The tech said that if the numbers aren't safe for her that she will wake me up so I can remove her cap.  Clearly, that will mean she failed.  If she doesn't wake me up, then I guess that might mean she passed.  But, it takes a couple of weeks to get the final report.

I can't see her numbers, which is weird.  I'm so used to being able to see what her sats and heart rate are.

I am really nervous and am wondering how I'm going to go to sleep.  I may have gotten my hopes up too high.  I will be pretty so devastated if she doesn't pass.  I think that will mean that she will have to have another jaw distraction surgery before we can try again.

10:20pm, the tech just came in (I held my breath, oh this is hard!) to adjust an EKG lead.  I asked her what her sats are and she said upper 80s, so that's great.  She's not on oxygen right now.  They might need to give me oxygen if they keep coming in here to make adjustments!

So did she pass?

can't wait to hear the results!