Today was a busy day. It was Murphy's first day back at school. YAY! And then Harlie had speech therapy and physical therapy at the school. Her therapy ends right as school lets out, so we just hang out for a few minutes and wait for him. Then we went to Harlie's appointment to get her hearing aid. YAY!

Here she is playing in the testing booth (although she didn't have to be tested today). 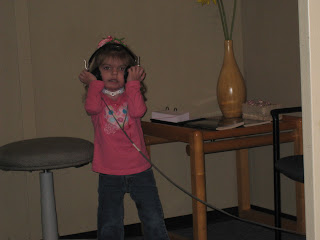 Anne said that she was happy she was playing in there. She wants her to be comfortable and not afraid when she goes there. Since we'll be there a lot until we get her hearing aid just right. In fact, our next appointment is in two weeks. She'll be tested then.

It was a struggle to get the hearing aid on. Harlie has become extremely sensitive and anxious when she is touched anywhere around her head. She used to be so good about us doing whatever to her hair. Now it is a major struggle to brush it. Just putting on or taking off her bib is upsetting to her. Luckily, she recovers quickly, but the fight is no fun. I suppose it will take some time before she is less fearful and more trusting again. 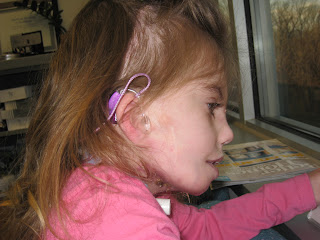 The aid has a string that is clipped to her shirt so that if she takes it out, we won't lose it. The clear soft plastic piece that goes into her canal was supposed to be glittery, but I think she said that it was too small for them to put it in there - or something like that. Harlie has an extremely small ear canal. The aid doesn't have an on/off switch. It turns on when the battery door is closed. So, when it isn't in her ear, the battery door has to be open to conserve the battery.

Anne said that if we can get her to wear it for 15 minutes at a time, that would be great. Ugh. Can't i just put it on in the morning and then take it off at night? Geez.

But, I gotta tell you - when she wears it - it's pretty darn amazing. After the first fitting, she was quite upset and was on my lap facing me. Anne was behind her and clapped. Harlie's eyes got wide and she looked at me like "what was that?" and she turned around to see where the sound came from. When I got her home I put her aid on (Anne told me not to have her wear it in the car). She was playing at the table - not looking at me. I called her name - and she turned to look at me!!!!!! Holy cow!!! So, with this way excited face, I just said "hi!" Then she looked away. She must think I'm the strangest person on the planet. But how cool is it that I said her name and she heard me - and responded!!!!! Oh the possibilities!!!

So, this is the bag that her hearing aid came in. 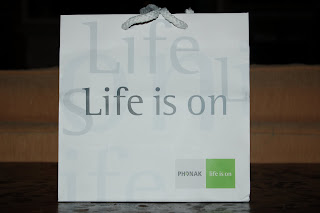 AWESOME!!!! Welcome the wonderful world of hearing aids. I am sure that once she realizes how much better it is to hear she will want them on. It is extremely difficult to get used to hearing EVERYTHING, imagine hearing yourself crunch your cereal. So yeah in the car it is NOISY! But over time she will tune out the extra noise and it will be fine. I think the 15 minute thing was a low ball because so many kids will kepp removing them. If she wears them longer, no harm...just be mindful of loud things and car noise, the radio, that baby screaming.

What a fabulous report! The sky's the limit for you all--I'm so happy!

GREAT NEWS!!! Congratulations - so so happy for all of you!

That's great! I can't wait to hear how it goes over the next few days!

That is amazing. I wanted to come check in on you guys over the holidays but I got a cold on Christmas eve day so I have been waiting until I was better. This is such great news about her hearing. I love the slogan too. It is a great reminder.

Awesome is right! Harlie looks so cool in the close up picture - like a miniature teenager with a phone clipped to her ear! How exciting for you both.

It is great to read good news on your blog.