I am going to try and be quick tonight.  It is already 9:30pm and I'm just sitting down to write.

Overall, today (Monday) was better than yesterday.  The smaller dose of Ativan was better.  She definitely talked more.  And she complained more.  But, that's okay.  Definitely better than not saying anything at all.

Tom left this morning.  It is always hard to see him go. 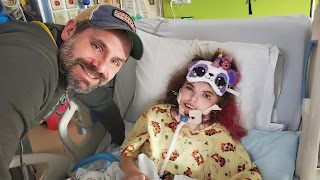 That was the first smile we've gotten out of her.

After he left her nurse and I got Harlie up and in the shower.  She was miserable and hated every second of it.  She saw herself in the mirror in the bathroom and she said, "I am so ugly."

Of course I told her she wasn't.  I told her I know you feel terrible and feel like you look terrible.  But, it is temporary!  You won't look like this - or feel like this - forever.  But, to her, two months feels like forever.  And this sucks today.  And it will suck tomorrow.  And the day after that.  I make sure that I let her know that she isn't wrong to feel whatever she feels. And then I tell her I love her and that I'm sorry - but we will get through this.  And one day, it will be over.

With any hope, the worst is behind us.  Hopefully, each day will get better from here on out.  So, it won't suck THIS bad for two months.  Maybe that's something.

After her shower, I cleaned all of her wounds and changed her trach ties.  And I brushed her hair and braided it. Her nurse found some pjs for her to wear instead of a gown.  I told her I really didn't want to put a shirt over her head.  She left and came back a few minutes later with this solution: 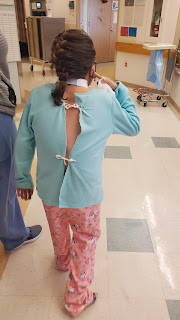 How good is she?!?!  She cut the shirt and that added ties to the back.  I was impressed - and thankful.

Then her nurse asked her if she wanted to go to the play room.  I was shocked that she said yes.  And she walked most of the way there, which is really good!  And they played air hockey. 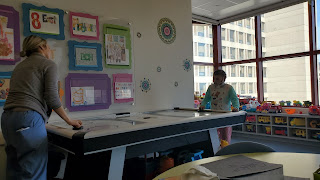 After all that, we came back to the room and Harlie wanted to sit on the couch with me.  She got to pick out a toy from a toy chest (she picked a puzzle) and wanted to do it next to me.  Child Life brought a table for me to do puzzles earlier in the morning. 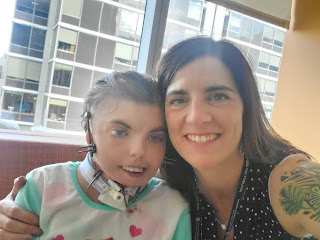 Once we sat down, Harlie said she was feeling happier.  That didn't last long.  But, at least it is a start.  This is really a tough one for her. 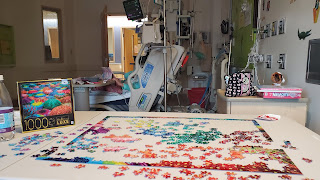 Speaking of tables, I forgot to tell you something funny that happened in the CICU.  Harlie asked for a bedside table.  I don't know who the girl was (I'm assuming she was new?) but when she brought the bedside table, I told her thank you.  Then she said, "No problem! You just press here to make it go up and down."

It took ALL of my strength not to laugh out loud at her.  Wow, she thought I didn't know how to adjust that table.  Do I look new here?  I mean, one quick look at Harlie should clue you in that this isn't our first time the hospital.  I keep seeing her innocent face showing me how to adjust that table, and I just laugh.  So funny!

Anyway, at one point, Harlie asked for some arts and crafts stuff.  So, I went down to the gift shop and reluctantly bought her a pen/sketch pad set.  It was more than I wanted to spend and I knew damn well she wasn't going to play with it.  I also grabbed her some Plus Plus blocks (?). 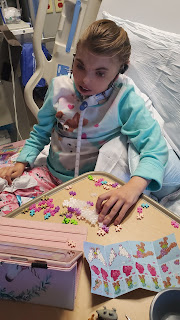 When I walked in the room and gave them to her, she said, "Got anything else?"  Tough crowd.

But, she played with both more than I thought she would.  And I fully expected to see some kind of dark drawings in the sketch book.  She was pretty mad today and said several times that she was ugly.  When I looked in the book, she had drawn three pages of rainbows.  RAINBOWS! I gotta tell you, I'm not feeling rainbows.

That girl is something.

Plastics came by early evening and asked me if I wanted to start to turn the screws.  Oh boy.  I suppose I have to do it eventually.  So, I did.  He had to hold her hands down.  But, I turned them okay.  He said that they are comfortable with whatever we are comfortable with as far as taking her home.

So, our goals are to get her on a pain regimen that works for her and that we can comfortably manage out of the hospital.  She is still getting Oxy, and her nurse doesn't think she can have that after discharge.  So, I think they will want her to go more than 24 hours without it.

I'm hopeful we will be able to be home before the weekend.

So far, I am really happy with all of her care.  Her doctors, her nurses, etc. have all been really compassionate and good to her.  And to me, too, actually.

So, aside from the fact that my beloved daughter hates the way she looks and feels, I guess today was an okay day.

Thanks for all the love and support.  I just can't say that enough.

Wonderful to see her up and about! She is doing great! I hope you can get her pain meds where you want them so you can get home!!
We have always gone home with a small dose of oxycodone for Faith’s JDs, after her last one in 2016, it was the smallest bottle I’d ever seen, with only a couple ideas in it. I guess hospitals are being way more careful about it.
Hugs!!