I started this post on March 30.  Sorry for the delay in finishing it!

Hi All!  I've gotten lots of messages asking about how Murphy is doing and we appreciate that so much!

He had his follow up MRI and appointment with Dr. Jane, Jr. last Monday, the 25th.  It went fine.  Here are some pics of the MRI... 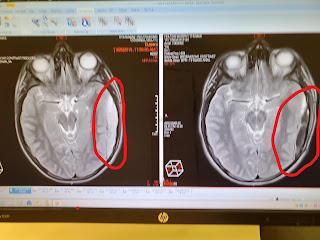 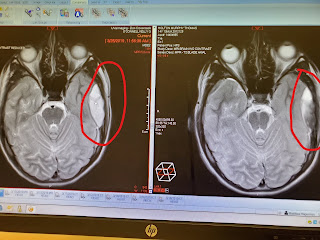 This next photo is proof that I am not always late.  The imaging place gives you this if you are early (which we have been each time) or on time for your appointment. 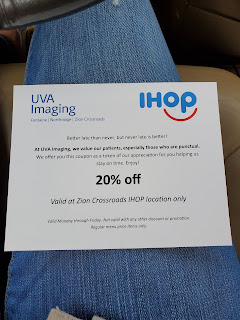 Although, I still got punished because I had to eat at iHop.  Haha!  But, Murphy was excited and he ate a lot of calories, so it was worth it. 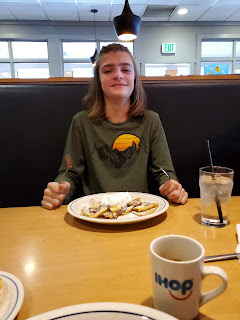 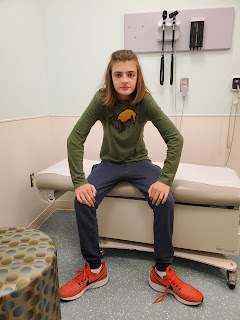 Anyway, back to the MRIs, the epidural hematoma has not decreased in size yet, but Dr. Jane said that it is starting to liquefy, so I think that is progress.  He wants us to see the Traumatic Brain Injury team to get more guidance on him returning to school.  I really have no idea what we are doing with that.  I did sign him up for home bound services, which they (our county) agreed to.  Harlie's home bound teacher picked him up, so she will return in the afternoons to work with him.  That is good because it is one less stranger to add to this house!  Plus, Murphy already knows her, she is good and I like her.

I think she said he gets 8 hours per week.  She will go to his school and pick up work from his teachers, then return it when completed.  Our third quarter just ended, so I have no idea how his grades are going to work out.  I have only spoken with one of his teachers (theater arts, about his role in the musical at the end of April).  We have spring break this week, so I guess I will start reaching out to them after that.  At this point, he has not been ready to work on anything. He's tried to make some things like brownies, cake, etc. from a box, and he said he cannot read the numbers (like the temperature or the times to bake, etc.).  He says the numbers look jumbled.  It has only been two weeks today since his injury, so I'm not really surprised.

Sorry, got distracted and didn't get back to blog.  This was a harder week than usual because I had to drive to Charlottesville for Murphy and DC for Harlie this week.  Anyway, Murphy had another MRI and follow up appointment with his neurosurgeon on Monday, April 8th.  For the first time Dr. Jane said the epidural hematoma is starting to decrease in size, so that's great!  We were really happy to hear that. 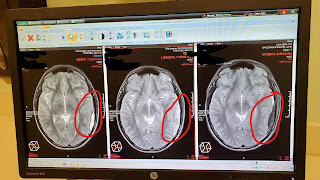 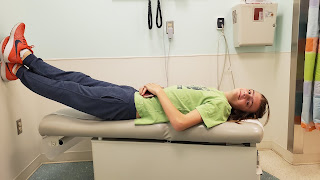 See how thrilled he is? 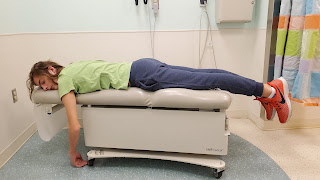 Overall, he is doing well.  He is pretty tired and easily irritated most of the time.  I'm sure we would have seen a bit of that personality change anyway, as he is just weeks away from turning 15.  But, I also think his memory took a hit.  I have to write lists if there is any hope of him remembering to do anything.  I have to put "eat breakfast, eat a snack, eat lunch" as items on his to do list. And he still forgets. A loss of appetite is a known issue with TBIs.  He lost a few pounds the first 2 weeks, but has regained it now.  We are making him do chores (he has plenty of time to still help out at home).  He is pretty bored and probably somewhat frustrated, although he doesn't really complain. He would much rather be able to go to school and ride his bike and go to the school musical rehearsals (more about that in a bit).  He doesn't have the desire to do much now.  We went on a little road trip for Spring Break and he did not want to go.  We made him, of course.  I think he was glad once we were there.  But, after each day he was totally wiped out.

Home bound school has been a bit of a struggle so far.  His teacher goes to his school to collect his work, but not all his teachers have put work in his folder yet.  He has been out of school for four weeks so far (one of those weeks was spring break). I will admit I feel overwhelmed with the task of figuring this all out.  It isn't as simple as you would think.  I really have no idea when he will be ready to return to school.  But, I can say that it isn't now.  I guess we'll know when it is time.

Sadly, I spoke with his Theatre Arts teacher and based on what he would have to be able to handle for rehearsals (and he would have to be off of home bound in order to participate anyway) he cannot fill his role for the school musical.  We are so sad for him.  He really wanted a part and he took his auditions seriously.  I know this is such a huge disappointment for him.  And for us, as parents, as we were really looking forward to him having this experience and seeing him on stage.  He took the news well and said he figured as much.  But, I think the Holton kids are really good at dealing with disappointment.  This family has certainly had more than our fair share of practice!

We go back to Charlottesville on Wednesday for an appointment with a TBI doctor.  His neurosurgeon said he knows surgery, but not long term recovery, so he wants us to meet with them.  We'll see how that goes.  His next MRI and appointment with Dr. Jane will be in three weeks.

Well, that's about it for him for now.  Thank you again for asking about him!

Thanks for the love!
Christy xo