I started a post over a week ago... but never was able to finish it.  I'll keep it at the bottom of this post.  But, want to give you a little summary first.

Overall, Harlie is doing great with no trach!  The nights are way better than the first several after coming home.  She seems happier (and she was happy before!).

The second we got home from the hospital I went upstairs and started to remove all trach stuff from her room.  Stuff like her IV pole, her heater/humidifier, inhalation bag, stationary suction machine, HMEs, suction filters, etc.

WOW!  What a difference that made in the look of her room!  It is already more kid-friendly and that is so exciting!

The next day when Brandy came in to work, she couldn't wait to go through all the supplies and clean out everything we no longer need.  It is amazing how much stuff goes along with having a trach.  I've known that all along.  But seeing all the equipment and supplies piled up and ready to leave this house is amazing.  It is so hard to believe this is our new, improved reality!!!

And I just can't describe what it feels like to be so free - no suction machine to think about, no emergency trach supplies to keep on hand wherever we go.  It's pretty amazing.

I've actually been having a hard time writing about it!  This is at least my 5th attempt at blogging in the last several weeks and it doesn't feel normal.  The words aren't flowing.  So, I've been giving up and saying to myself that I'll come back when I'm more in a blogging mood.  It just all feels weird.

Maybe it's because this was such a huge, monumental big deal to us.  We had to work so hard to get to this point.  And we had to put Harlie through so much torture to try and give her a better airway.  An airway that most are just born with.  And we did alright by her.  Two out of the four jaw reconstructions worked!  Traveling to Boston Children's Hospital was the right call.  And worth every penny.  Knowing that I made the right decisions (when smaller tasks seem so difficult) is a feeling I just can't describe.

I hope that when I say "thank you" for rejoicing with us, you know how much I mean it.  To finally get to share FANTASTIC news and hear "congratulations" and "cheers" was a feeling like no other.  Thank you so much for sharing in our joy and huge success!  It has meant so much to us!

We have been very busy since, and I have plenty more to share.  But, will have to save it for another day.

Here is what I started on a while ago:

So, how is Harlie doing a week post-decan?

Great!  She really seems to be very happy that it's gone.

I'll start with where I left off - in the hospital.  On Monday afternoon, Harlie's cardiologist came back by to see me.  We got caught up on things.  It had been a while since she had seen Harlie.  I feel like I need to go back a bit to explain where we are.

I have taken Harlie to hundreds of doctor's appointments.  And most of them were because she was sick.  So, I have a hard time with taking her for well checks.  For one, doctor's offices are pretty germy places, and in general, I try to keep her away.  And two, we're over it.  She's the healthiest she's ever been and we are trying to just live our lives.  I do take her to her pediatrician's well checks for her immunizations and to bring her pediatrician up to speed.  But, really, that's the only well check we do regularly and on schedule.

But, she has a pretty complicated heart condition with a pacemaker and apparently, I need to be better about scheduling those well checks.  Who knew?

So, she has her cardiologist in DC (who we've seen since I was pregnant with Harlie) and after Harlie was born, we started seeing a cardiologist in Richmond.  It was important to have one in both areas so we didn't have to drive to DC all the time (back in the day we were seeing one of the two fairly often) and so when she was in our local hospital, she had a cardiologist that could follow her.

Well, as time has slipped by and Harlie has gotten healthier, we've really only seen her local cardiologist for pacemaker checks.  And those checks were not really "well checks" since we had a problem and he had to fix it by adjusting her pacemaker.  After he adjusted in June of 2014, we went for a follow up a few months later (I think in September) and I don't think I've taken her back since.  Everything seems good, I know her battery is good (it's good for like years), we're busy living life, so I just don't think about it.

So, apparently, Harlie hasn't had a true cardiology well check in some time.  And it's been almost a year since her last pacemaker check.  So, her cardiologist suggested that she get an echo (ultrasound of her heart) while she was there.  And depending on how Wednesday night went, get the pacemaker doc back up to see her.  So, all of that would count as a well check and I don't have to worry about it for another year.  Awesome.

Wednesday night went pretty much the same as Tuesday night - with her low heart rate alarm blaring all night.  So, the pacemaker folks returned Thursday morning.  They told me that they want me to do phone checks every three months - where you put the phone up to the pacemaker and it sends info to the office.  We aren't set up for that yet.  So, they are going to send me what I need for that.

And she got her echo. 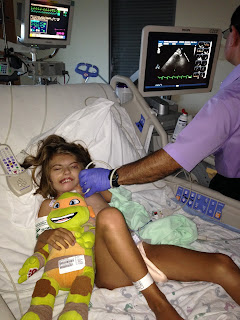 So, after all that was done, she was ready to go. 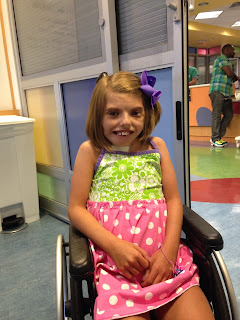 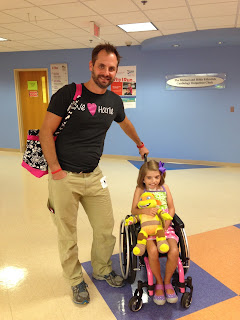 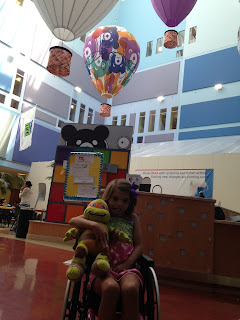 The first night at home was rough.  We woke up at 3:30am because she was so noisy.  We sleep with a baby monitor on so we can hear her and her alarm, should it alarm in the night.  We went and propped her up with pillows.

Unfortunately, I didn't think that through at the hospital.  In the hospital she was sleeping with the bed propped up.  For her whole life, every time we've been in the hospital, she likes to be in a more sitting up position.  So, when I tried to flatten it out the first night, she stopped me and pushed the buttons for the head of the bed to go back up.  Not a battle I should fight, and if it makes her happy, so be it.

Except we were not recreating our home conditions.  And when she was sleeping flat at home, she sounded terrible!  And it was scarier than I realized it would be.  Worrying about your child's breathing abilities in the middle of the night is no fun at all.  Luckily, her sats and heart rate looked good.  I took some video of her sleeping and sent it to two of my trach mom friends who live out west.  I was hoping that one of them was still awake.  And my friend Ann responded and made me feel so much better.  After years of being told to read the patient, not the monitor - I needed to read the monitor, not the patient.

But, after putting some pillows under her, she seemed a lot better.

Since then, each night has gotten better.  Tom got a wedge pillow and that has been great.  She realized soon after getting home that she didn't want to wear a bandage on her neck anymore.  She seems really proud of her naked neck now.

I've been thinking of texting to see how her sleep has been, so I was glad to see this update and know that it improved. It's also great that she seems happier. I felt the same about Ainsley and yet I couldn't quite explain it. I'm thinking maybe they are more comfortable? It's great that you are feeling so confident that you packed up her gear. I'm still holding onto ours (in the attic) until we make it through the first cold and flu season with the stoma closed, but that's because Ainsley has severe OSA and is on CPAP. It is amazing how much stuff that little tube takes to manage. It sounds like things went well with the cardiologist too and you have a period of care free health for a bit. What a refreshing change. Enjoy it! XOXOXO.